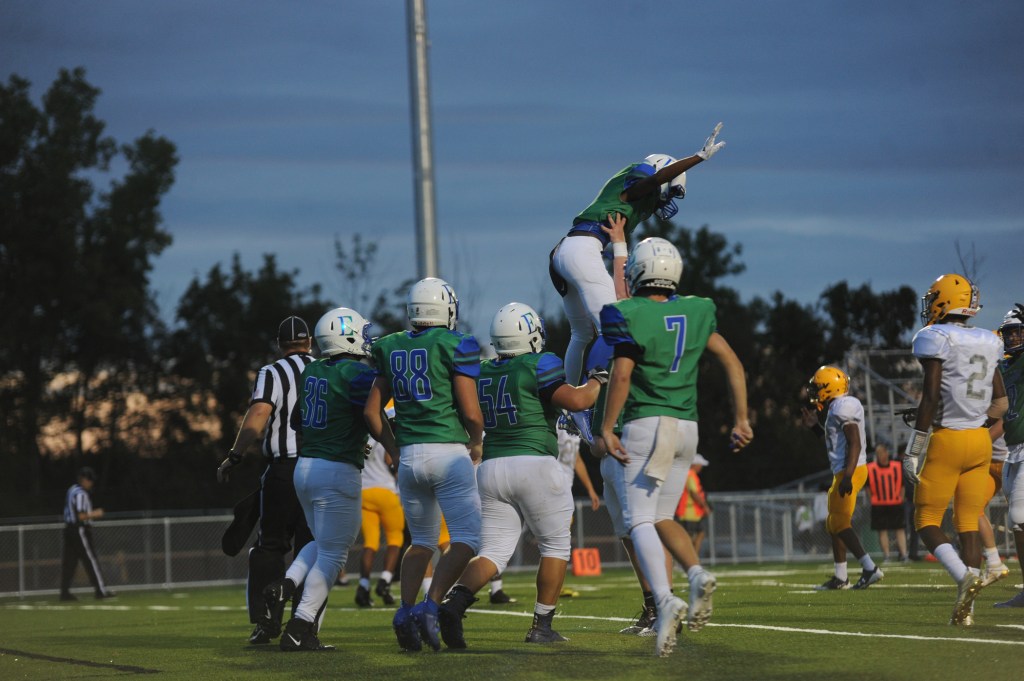 The first quarter of the Jaguars 35-28 loss at home to Franklin County was like a good boxing match, with both teams trading blows and it looked like it was going to be a high scoring slug fest.

The Flyers opened the game up with a drive that took just over two minutes and ended with a touchdown.

East Jessamine’s offense came out and immediately punched back, with quarterback Turner McHolan breaking a 37-yard run on the first play. Dylan Moore capped that drive off with a touchdown run and the game was tied at seven with only four minutes off the clock.

Once again Franklin came back and scored on its next drive and once again, the Jags answered with another Dylan Moore touchdown. For his two scores, Moore was named East Jessamine team MVP for the game.

“Dylan is a really good football player,” East coach Mike Bowlin said. “Earlier in the game he wasn’t getting away like he had. I knew if I kept riding and kept going with him he’d pop out of there.”

With 8:20 left in the half, the game changed. On fourth down, East Jessamine was going for a punt, but Franklin County broke through and managed to block the kick and return it for a touchdown.

“The difference in the game was the blocked punt,” Bowlin said. “They had a questionable scheme. They grabbed one of our kids who was supposed to be protecting and basically tackled him. Then they ran through his empty gap. By chance our snap was just a little bit to the right and our punter steps right into it. It was just a series of things that all went wrong and against us.”

The Flyers added another score to make it 28-14 going into the half.

At halftime, I told them that we were still going to be in this thing. We were down two touchdowns and I told them we were going to keep fighting,” Bowlin said.

And McHolan took that to heart as he burst through a Franklin blitz to take the ball 57 yards to the house to put the Jags within striking distance.

“I had a pass play call and they blitzed into it. The thing — and I’ve told people all year — that makes us dynamic is that you can’t sit on one thing,” Bowlin said about the play. “We’ve got multiple weapons. One of our weapons is Turner McHolan. When we went back and faked the run for the pass and they blitzed on the fake, he cut underneath of them and was gone out the back door.”

Franklin pushed the lead to two scores again with a 39-yard TD pass and East answered with a goal line pass to Jaylen Taylor for the final score of the game.

An East fumble with 6:24 to go sealed the game.

Despite losing, Bowlin liked what he saw out of his guys, and knows that there is still plenty of games left to play.

“The worst part about losing the first game is that you’ve got it circled on the calendar all year. Everybody talks about the first game,” he said. “From January all the way through now everybody is preparing and planning for this game. In reality, there’s 10 games. There’s a district championship still to be decided. There’s playoff games. I told them today that they’re going to give us a trophy whether we win or lose and it’s not the trophy we’re after. Our trophy is down the road. If we can take what we did tonight and get better on it, we’ll be ok.

“I’ve got seniors who’ve been this way before and fought these battles before,” he added. “They know that you’re either going to feel bad or feel great tonight but the season’s on down the road. The district games with the little asterisk next to them is the ones we want to win.”