New pick me up 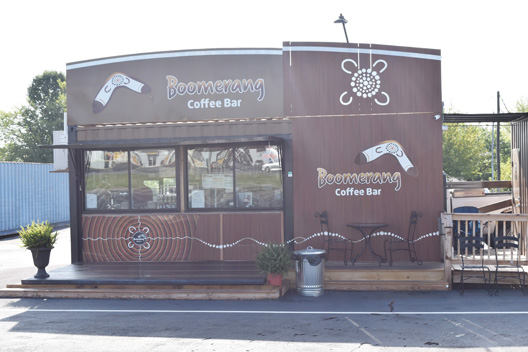 After he visited Australia in 2017 and experienced the coffee culture there, Hendrik Dewet was inspired to sell his own Australian-style coffee in the U.S.
“It was just amazing coffee there,” he said.
Dewet co-owns Boomerang Coffee Bar along with his brother. The shop opened April 17 and is located at 206 Blueberry Lane in Nicholasville and sells Australian-style coffee as well as smoothies and food items.
Dewet said he believes the quality of the coffee is what makes the shop unique from other coffee shops. He said the coffee has a unique flavor — it’s not bitter — and spring water is used for all beverages. He said when people drink the coffee, they’ll know it’s coffee because the blend is strong. There are also over 30 flavors for the drinks, including tiramisu, Irish cream, vanilla, hazelnut, butter pecan, caramel, white chocolate, chocolate, mint and fruity flavors.
“I believe our quality of our product is very good, and I think better than our competition although we’re just a small company,” he said.
Dewet has lived in the U.S. for 22 years and is originally from South Africa.
He moved to Lexington in 2017. Later, he and his brother came up with the concept of selling both coffee and the units where the coffee is sold. Dewet build the unit where Boomerang Coffee Bar is located himself, and the plan is to build and ship additional units, for people to eventually buy the units, along with the brand, and put the units where they have property, expanding where the franchise has locations.
The focus of the brand, though, is the coffee, Dewet said. Boomerang Coffee Bar has a roaster who custom roasts coffee beans based on Dewet’s requests for how he wants the beans prepared.
A couple of Boomerang’s unique products include its cyclones, which Dewet said are like frappes, that can be flavored with espresso or with fruity flavors, and the Sugar Glider, which Dewet described as a dessert coffee that includes espresso, milk and a few secret ingredients. The Sugar Glider can be iced or blended. The shop also serves iced coffee, cold brew, lattes, smoothies, teas and other drinks.
Cheyenne Scott, shift manager and head barista at Boomerang Coffee Bar, has been working at the shop since it opened, and she said Dewet gives her and other employees freedom to experiment with drinks, and she enjoys having him as a boss.
“He’s great to us,” she said.
Scott’s responsibilities in the shop include making sure she and other employees get their jobs done, keeping in charge of the registers and taking and making orders.
Her favorite part of the job is getting to experiment with making drinks. One of her experiments was a strawberry-flavored cross between a slushie and a smoothie, she said.
She said several customers have been at the shop every day since the first day it opened, and she often knows their orders before they say anything, unless they decide they want something other than their usual.
“I’ve had a lot of customers say they like us better than Starbucks,” Scott said.
Scott said she’s gotten to know several of the regulars well, and they recognize her when they go through the drive-thru.
“I love working here,” she said.