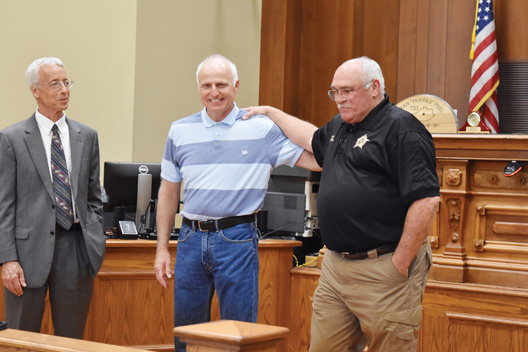 ‘A job to help people’

Jessamine County’s Chief Deputy Doodle has called it a career after 30 years.
Allen Peel, who goes by “Doodle,” retired last week from the Jessamine County Sheriff’s Office after being hired as a deputy in 1989 and becoming a Chief Deputy in 2007. The way he approached his job, he said, was to treat everyone with respect and build community.
“It was a job to help people, you know, to be able to help people and make a difference,” he said.
On Friday, Peel’s friends and family and several city and county officials gathered in the Nicholasville courthouse for a reception to honor Doodle’s service and retirement. Those present included Jessamine County Sheriff Kevin Corman, Jessamine County Judge Executive David West, State Democratic Rep. Russ Meyer of Nicholasville and Nicholasville City Commissioner Betty Black.
During Peel’s speech at the reception, Peel said when he was hired onto the sheriff’s office in 1989, he was welcomed by Steve Walker, the sheriff at the time, and Steve’s brother Joe Walker later put Peel on full-time.
“They had faith in me,” Peel said during his speech. “Back years ago, a lot of people didn’t have faith in me.”
Peel thanked his parents during his speech, particularly his mother, who he said reminded him to never let his badge go to his head.
“I feel good that, after seeing some of the most honorable comments and posts congratulating me, I feel so good that I was able to achieve that goal,” he said.
Peel’s mother also played a part in why he got his nickname, he said. When he was a newborn, she thought the way he was kicking around made him look like a doodlebug, and since then, everyone has called him Doodle in Nicholasville and Jessamine County, where Peel was raised.
“From infant on, and as I got older, it still stuck, and that’s all everybody knows me by around here,” Peel said.
Now 59, Peel said he decided to retire because he felt it was time to pursue the next chapter of his life.
“It was tough to walk away from,” he said. “I thought about this decision for a long time, but I came to the conclusion, and talked with family members and all, and prayed about it, and I just felt that it was the time for me to go on and try to enjoy things while I was able to.”
Before he became a deputy for the sheriff’s office in 1989, Peel said he did jobs here and there, including working at factories, helping on his father’s farm, and refereeing basketball games.
He didn’t know being a deputy would turn into a career — he just decided to pursue it because he said it seemed like a good job. Now, he said, he hadn’t taken time off of his job in years, and right now retirement feels like a vacation.
Now that he’s retired, he said he’ll probably try to spend more time with family and friends, travel to visit friends and family who don’t live in the community and keep up with University of Kentucky athletics.
In his time with the sheriff’s office, he said his philosophy was to treat everyone with respect.
“I always wanted to treat the public like I wanted to be treated,” he said. “You know, treat them with respect, and I think you would get that back.”
For example, Peel tried to return every call he got.
“They appreciated you calling them back,” he said. “Just a phone call back meant a lot to them, that you received their call and that you were interested in what they had to say.”
In his time with the office, Peel said he saw a lot happen. One of his most interesting stories happened in February 1992 when he was responding to an alarm at Newman Road. Five minutes later, there was a shooting and murder at a nearby store and Peel helped arrest the suspect. Peel said he always thought it was crazy that he had just happened to be nearby five minutes before the murder happened.
Peel said he believes he and the rest of the sheriff’s office gained the public’s confidence, which was reflected by the fact that they kept being voted back in, and he said he has felt honored by the public’s reaction to his retirement.
“I’ve been humbled and honored by the outpouring of affection that people have expressed in the community for my retirement,” Peel said. “It’s really made me — put a warm spot in my heart, that everybody, the way they’ve come to me when I announced my retirement and since I’ve retired. They’ve really, really been really nice, and I can’t thank the community enough, the community I’ve loved and served and lived here all my life — I can’t thank them enough. It makes me feel good that I’ve kept their confidence and they’ve felt that way about me after I retired.”
During Jessamine County Sheriff Kevin Corman’s speech during the reception for Peel, he said he and Peel weren’t only coworkers, but friends, and he said Peel will always be a part of the sheriff’s office.
“We just formed a bond, a bond of brothership between myself and Doodle and Joe Walker and Steve Walker, that you just can’t find every day,” Corman said during his speech. “It’s a bond that will never be forgotten.”
Corman said he met Peel about 40 years ago, and they became friends because they found they shared a lot of the same values when it came to law enforcement, including having respect for not only the people they were protecting in the community, but also those they charged with crime.
Corman said he and Peel shared a police cruiser early in their careers, and often, Peel worked days and Corman worked nights, so they worked together a lot. When Corman apppinted Peel as Chief Deputy in 2007, they made hiring decisions together as well.
“Everything we’ve done we’ve pretty much done as a team,” Corman said.

Days Gone By opens in Wilmore

Antique, boutique shop celebrates with Facebook specials   By Olivia Mohr olivia.mohr@centralkynews.com When Tiffany Mayhew was a child, she and... read more