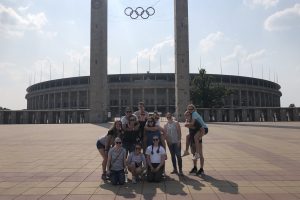 Recently, Dr. Paul Nesselroade returned from Germany and Poland where he took a group of students on the Human Dignity Tour, an annual psychology travel course that explores the concept of human dignity by examining the history and psychology of the Holocaust.

Students visited sites such as the Auschwitz Concentration Camp, the Schindler Factory and the Brandenburg Euthanasia Memorial.

“It taught me that we must treat each other better, go out of our way to love and care for the weak and the sojourner,” Troutman said. “It also reminded me of how we are valuable because God says we are; no human can strip another human of their value in God’s eyes.”

Participating students earned three credit hours towards the PSY 393 Human Dignity Tour of Central Europe course. For many students, the trip also fulfilled their Cross-Cultural Engagement credit, which requires that all Asbury students partake in a cross-cultural engagement experience by going abroad or on a stateside trip prior to graduation.

“The day that impacted me the most was our six-hour tour of Auschwitz I and II,” student Katharine Doty said. “I also enjoyed being able to walk around Berlin and see places that I had always read about. I loved being able to get to know people outside of my usual friend group and share experiences with them that I will remember for the rest of my life.”

For Catherine Daflucas, who went on the trip with both her boyfriend and her brother, it was comforting to share the experience with two of the people closest to her. Daflucas also used her time on the trip to reflect on how the concept of human dignity intersects with Christianity.

“As a Christian, human dignity is one of my core values because the Bible tells us to love our neighbor as ourselves,” Daflucas said. “It tells us that each and every one of us humans was made in the image of God and loved by Him.”

Following the students’ departure, Nesselroade stayed in Germany to contemplate ways to expand the Human Dignity Tour in the future. He explored more sites of historical significance, including the Nazi War Trials building and the Bernburg Euthanasia Center, which may be added to the trip’s agenda in the coming years.

In late June, Dr. Doug Walker took a group of Media Communication students to New York City to experience the city’s bustling media industry firsthand. Among their activities, Asbury students watched a taping of “Good Morning America,” attended a “Sesame Street” workshop and spoke with media professionals about the ways their faith in the Lord influences their careers. Students were also able to work cameras during a recording of “Live with Kelly and Ryan.”

“Talking to professionals in a wide range of media jobs was very informative and encouraging,” Catherine Haws said. “A big takeaway that I learned was that your character is far more important than anything else, because it influences how you live your life and work with the people around you.”

In between going to panels and meeting media contacts, the group attended two Broadway shows, much to the delight of Rose Gary.

“’Phantom of the Opera’ was phenomenal and so was ‘Come From Away,’” Gary said. “[I’m] speechless.”

Gary also enjoyed learning from the professionals they met with throughout the course of the trip.

“The trip taught me so many things, but one main thing would have to be that in order to succeed you cannot live in your past nor your mistakes, but instead take them as an opportunity for growth,” Gary said. “Also, to be hired in the media world, you must be the best at whatever you do. Start small and be humble, and God will reward you.”