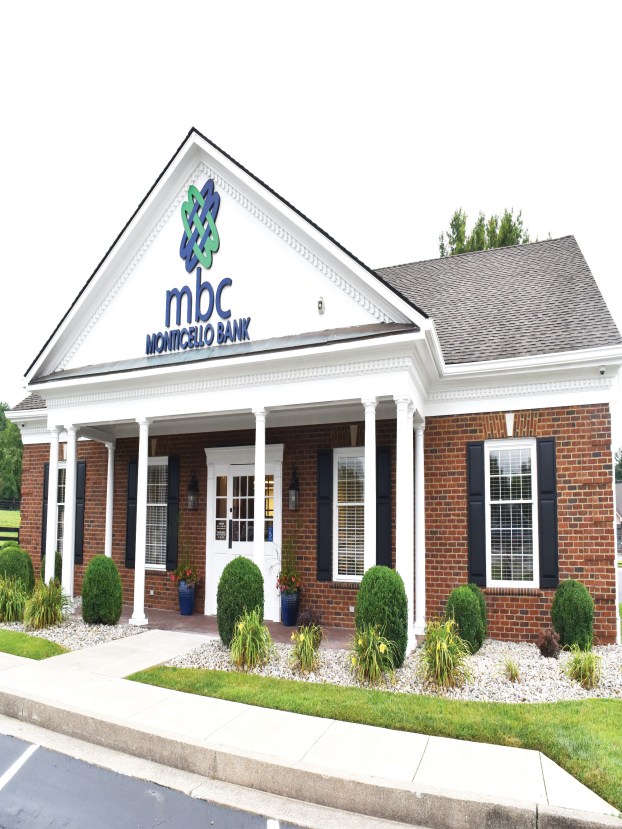 By Olivia Mohr
olivia.mohr@centralkynews.com
The staff of Monticello Banking Company’s new branch location in Nicholasville has their roots in Kentucky, and with its new location hopes to serve the residents of Jessamine County.
“On Harrodsburg Road, there are a lot of houses and rooftops and subdivisions that have grown out here, and so we thought that we can really cater to the community,” said Steve Brinson, senior executive officer of the branch location.
The MBC branch location at 104 Springdale Drive in Nicholasville opened May 28. Its grand opening will take place Aug. 2 with a ribbon cutting at 11:30 a.m., catered food, giveaways and a money machine for attendees.
MBC has 20 locations in 11 counties in Central and Southern Kentucky with its main office in Monticello. The Nicholasville office’s drive-thru hours are Monday through Friday from 8:30 a.m. to 5 p.m. and Saturday from 9 a.m. to noon. Lobby hours are Monday through Thursday from 9 a.m. to 4 p.m. and Friday from 9 a.m. to 5 p.m., according to MBC’s website.
Some of the bank’s services are free reward checking, which allows customers to earn 1.6 percent APY for balances up to $15,000 and monthly benefits if they meet certain qualifications each month, and a 13-month CD special with a 2.53 percent APY.
Brinson said MBC offers a full line of commercial and personal banking services, and he said another service offered is that while at larger banks, decision makers for lending services may be located elsewhere, at MBC decision makers are often local, which helps them be more accessible.
The Nicholasville office currently has a staff of four people, and Brinson said the staff is small because the location is still growing. However, he said each staff member has roots in Kentucky. He is originally from Somerset and has lived in Lexington since 1985, and both areas have MBC locations. Office staff members Tara Popham, Neil Conley and Chad Payne also are either from areas where MBC has office locations or near where there are office locations. This, Brinson said, allows the staff to network with customers from around Kentucky and build community.
“It feels like you’re dealing with a true hometown bank because of where our roots are,” he said.
MBC Regional Executive Officer Rodney Weaver said MBC’s ties with the community are helpful when it comes to community service which makes it stand out from larger banks.
“We want to sit down and talk to you, and we don’t feel like you get that kind of personal one-on-one communication and relationship with big banks,” Weaver said.
Weaver said MBC focuses on forming relationships with customers. For example, Brinson said this week a customer showed up at the door of the office at 4:30 p.m. once the lobby was closed, but the staff let the customer in because they recognized them.
It’s MBC’s focus on community, Weaver said, that has made the bank stick around for so long. MBC was founded in Monticello, where Weaver is from, in 1895. Brinson said it was one of the few Kentucky banks to survive the Great Depression.
Weaver said the bank’s business model, which is built partially on customers hearing about the bank by word of mouth from their family and friends, has helped the bank last.
“Once the community accepts you as somebody that wants to help families grow and small businesses grow and understand anyone’s particular needs and how that community wants to grow, then I think it’s very easy to last,” Weaver said.
According to a Forbes magazine 2019 list of America’s best banks in each state published last month, MBC was ranked the second best bank in Kentucky, which Brinson said was a nice surprise.
Weaver said the bank strives for excellence in customer service.
“We want to offer the best customer service and superior products to meet as many needs financially and in our communities that the bank can, be a premiere financial institution in the state of Kentucky,” Weaver said.

From staff reports The burden of infrastructure changes with the rising pension costs on the Jessamine County Health Department’s budget... read more