‘You can do anything’ 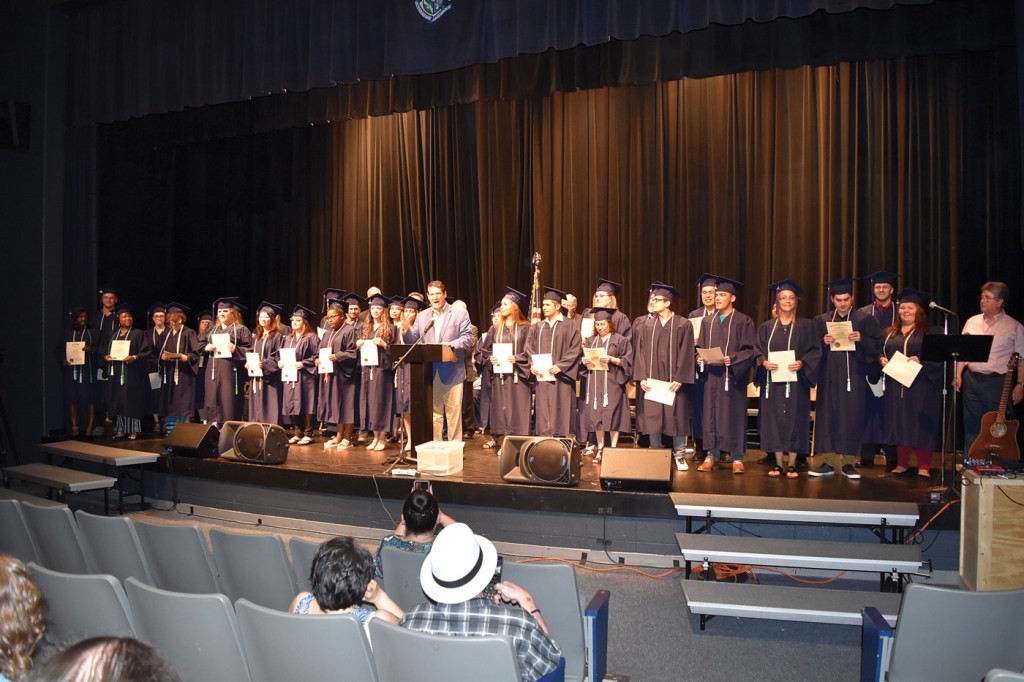 By Olivia Mohr
olivia.mohr@centralkynews.com
Tanisha Anderson didn’t let cancer stop her from pursuing her GED, and Amanda Trumbo didn’t let the fact that she dropped out of school three days before her eighth-grade graduation hold her back, either.
These were just a couple of the stories student speakers shared at the Jessamine and Woodford County Adult Education ceremony last month at East Jessamine High School, located at 815 Sulphur Well Road. At the ceremony, Jessamine and Woodford County Adult Education staff and officials honored students with awards including ESL Student of the Year Awards for both counties, Highest GED Scores Awards, a Spanish GED Student of the Year Award and GED Student of the Year Awards for both counties.
“It doesn’t matter how old or young you are,” Trumbo said. “It doesn’t matter because you can do anything.”
Trumbo, a Jessamine County graduate, said when she was growing up in Pulaski County, school was difficult for her. She was diagnosed with ADHD, and it wasn’t widely understood at the time.
“Children like me were put in cubicles to be separated from other children, removed from the class, put in the hallway,” she said. “At an early age, I gave up.”
Now 39 and a Nicholasville resident, she said she hadn’t been in school for 23 years after she dropped out of school before her eighth-grade graduation.
As she grew older and became a mother, she said she realized her child had surpassed her in education at an early age. Her daughter couldn’t ask her for help, as Trumbo had a fifth-grade reading level and barely knew multiplication.
“Now a mom of three, I knew I had to make a change for not only them, but myself as well,” Trumbo said.
The change began with a sign at Bargain Hunt that read “Free GED.” She said at first, she hesitated to pursue a GED, but she went for it in November 2018, and she earned her GED in March. Her oldest daughter also hadn’t finished school, so when Trumbo was pursuing her GED, she told her daughter she wanted them to get their GEDs together. They went back to school and both obtained their GEDs. Trumbo said she’s shown her children that life is hard but not to give up.
“It might take you a while to get back to where you need to be, but it’s nothing to give up on, and I want them to be able to see that they can do anything that they want to,” Trumbo said.
Trumbo said her mother-in-law was who inspired her to go back to school. She was in her 40s when she went to college and now has two master’s degrees and is thinking of going back to school again.
Trumbo said her mother-in-law was there for her and stepped in when she didn’t feel like she had a family.
“She was always the one that said, ‘You’re not quitting. What are you — no. I don’t have quitters in my family,’” Trumbo said. “And that really helped me, just watching her. She thrived, and she flourished so powerfully. And that’s what inspired me.”
After Trumbo got her GED in March, she went to Woodford County to check how the adult educators there were doing and asked them if they needed help, and now she has a job set up in Woodford County to work at the adult education center.
Tanisha Anderson, who is a Lexington resident and Jessamine County graduate, received the Jessamine County GED Student of the Year Award at the ceremony. Anderson, 41, took three months to earn her GED in December 2018 after not being in school since 1995. Though she has cancer and was going through chemotherapy while balancing pursuing her GED with a part-time job, she showed up to her classes every day. When she found out she earned her GED, she brought thank-you gifts to the adult educators.Joann Conkwright, college and career navigator on the Jessamine and Woodford County Adult Education staff, said it was Anderson’s kindness, spirit and work ethic that earned her the Jessamine County GED Student of the Year Award.
“This was just another example of her big heart and the grace that is sure to propel her to future success,” Conkwright said.
Anderson, a wife and mother of three children, said she hid the fact that she was pursuing her GED from everyone.
“They thought I was going to work every morning,” Anderson said. “They did — they thought I was getting up and going to work. I was ashamed because I’m 41 years old and didn’t have my GED and I couldn’t get a good job or anything, and I couldn’t go to college.”
She said that at one point, her husband thought she was cheating on him because she was getting up early in the morning to go to Jessamine County.
However, despite her feelings of shame and the personal issues she was grappling with, Anderson didn’t give up.
She wanted to pursue a job she wanted and go to college, and she believed she needed a GED to do so.
“I was tired of working fast food,” she said. “I was tired of working housekeeping, and I felt at the bottom.”
Now, Anderson has already started school at Midway University and is pursuing nursing while holding a part-time job.
“Anybody who thinks they can’t do it — you can do it,” she said.