‘Carry on the purpose’ 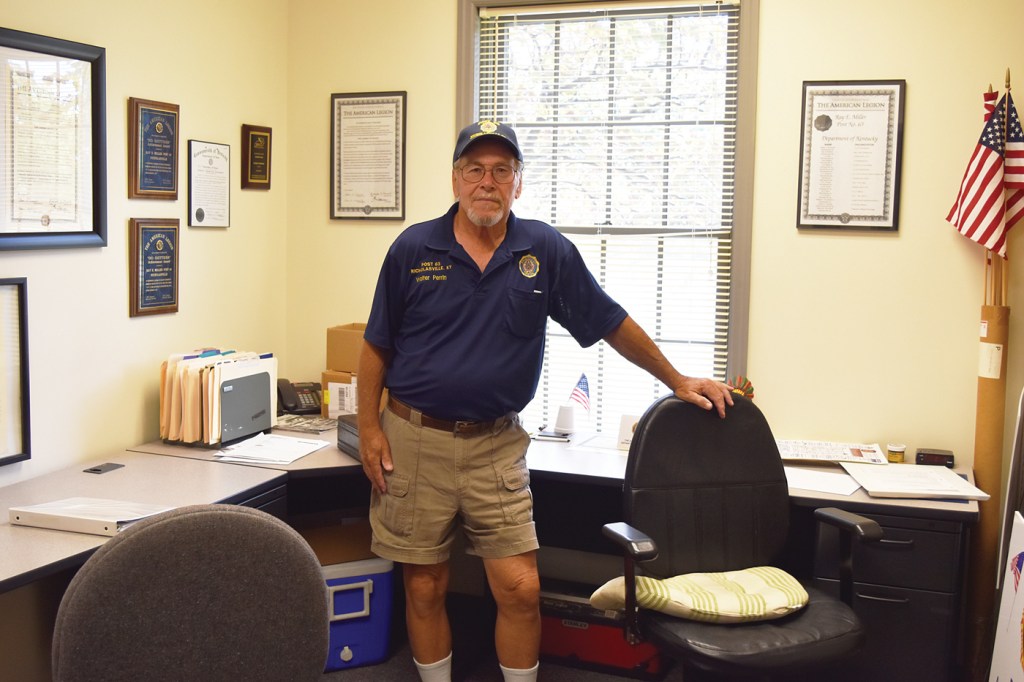 By Olivia Mohr
olivia.mohr@centralkynews.com
Ray E. Miller, who The American Legion’s Ray E. Miller Post No. 63 is named after in Nicholasville, was drafted into World War I and joined the U.S. Navy later dying of pneumonia in 1918 at Great Lakes Naval Training Station in Illinois at 21 years old. According to his obituary published in the Jessamine Journal, his parents were notified about his illness, but before they could arrive, he had already passed away. His remains were sent back to Nicholasville where his parents lived.
In 1919, The American Legion, a nonprofit organization, was chartered as a patriotic veteran’s organization and now has over two million members in over 13,000 posts worldwide. On the wall of the Ray E. Miller post’s office, which is currently located at the Jessamine County Senior Citizens center at 111 Hoover Drive, is a framed document with the names of the original charter members of the post from 1919. The goal of the organization is to help veterans and their families, said Walter Perrin, commander of Ray E. Miller Post No. 63. Perrin is a Vietnam War U.S. Army veteran who also served in Germany with a Persian missile outfit. “Personally, the American Legion gives me a chance to give back to my fellow comrades, to help the community, to make new friends and just generally, I enjoy being around veterans because most of the time, veterans — most of them think alike, and we can talk about things,” he said. Perrin has been a member of the Legion for 31 years and a member of the Ray E. Miller post for about 10 years. The post has 75 paid members, about 30 of whom are active members. Perrin said The American Legion has stuck around for so long due to the support of veterans.“They just keep this organization going so veterans can come together and be comrades and work together for the community and everybody else involved, and that’s the reason it’s stayed together this long,” he said.There is also a 15-member honor guard at the Ray E. Miller post that has formed over the past year, Perrin said. The honor guard goes to veterans’ funerals to conduct honors and pay respects. Perrin is a member himself and is also a member of another honor guard.
“Which is another thing I enjoy doing — paying honor to the veterans that let me live in this country free,” he said.
Perrin said the honor guard will be posting colors July 18 and retiring colors on July 21 out to the Barbasol Champtionship golf tournament in Jessamine County. He said it’s good for the post because it’s a pro tournament, which he hopes will raise awareness for the post, as some people in the community aren’t aware Jessamine County has a Legion post at all.
The Ray E. Miller post donates each year to Thomson-Hood Veterans Center, Camp Nelson National Cemetery, the Jessamine Senior Citizens center, the Nicholasville homeless shelter, the KY Sheriffs’ Boys and Girls Ranch and to give scholarships to two high school seniors from East and West Jessamine High Schools. It holds two raffles each year at Kroger and Tractor Supply and uses the money collected to donate to the organizations.
Perrin said the post has a Christmas party for families in the winter, the post has built things like flower boxes for Thomson-Hood and holds an annual watermelon picnic there for residents in the summer, it donates hot dogs and potato chips to Boy and Girl Scouts when they place flags on each grave at Camp Nelson National Cemetery for Veteran’s Day and Memorial Day and they help distribute groceries to residents of the Jessamine County Senior Citizen’s center on the second Thursday of each month.
The post also helps with other events and people. Perrin said one year, he and the post’s sergeant at arms Tom Swisher bought groceries for Christmas and took them to a veteran who had one leg.
Swisher said one of his favorite events with the post is the watermelon picnic at Thomson-Hood. The post hasn’t decided when to host the picnic this summer yet. Swisher said they take about 30 to 40 watermelons there and serve them to the residents, and he loves the looks on their faces.
“You talk about something that makes their day,” Swisher said with a laugh.
Similarly, Perrin said he loves serving food to the Boy and Girl Scouts at Camp Nelson.
“Those children are so appreciative and so polite and well-mannered – it makes you realize there are a whole lot of good people in the world, you know, and especially in this country,” Perrin said.
Perrin said that right now, the post’s goal is to eventually have its own building because it would allow them to hold more events and support the community more than it already does. For example, he said the post could host bingo games and hold raffles easier if they had their own building.
He hopes for the county to eventually lease a small piece of land to the post and to get a grant through the state to purchase a building. However, since the post lacks sufficient funding for rent, he said the post is staying at the Jessamine County Senior Citizen’s center for now.
Perrin said the post is also trying to recruit new members, especially because some of the post’s members aren’t considered active members because its older members are unable to make meetings or help as much when needed. Because of this, Perrin hopes particularly for new younger members.
“Then they can carry on the purpose of the Legion.”

‘You can do anything’