‘Think about our future’ 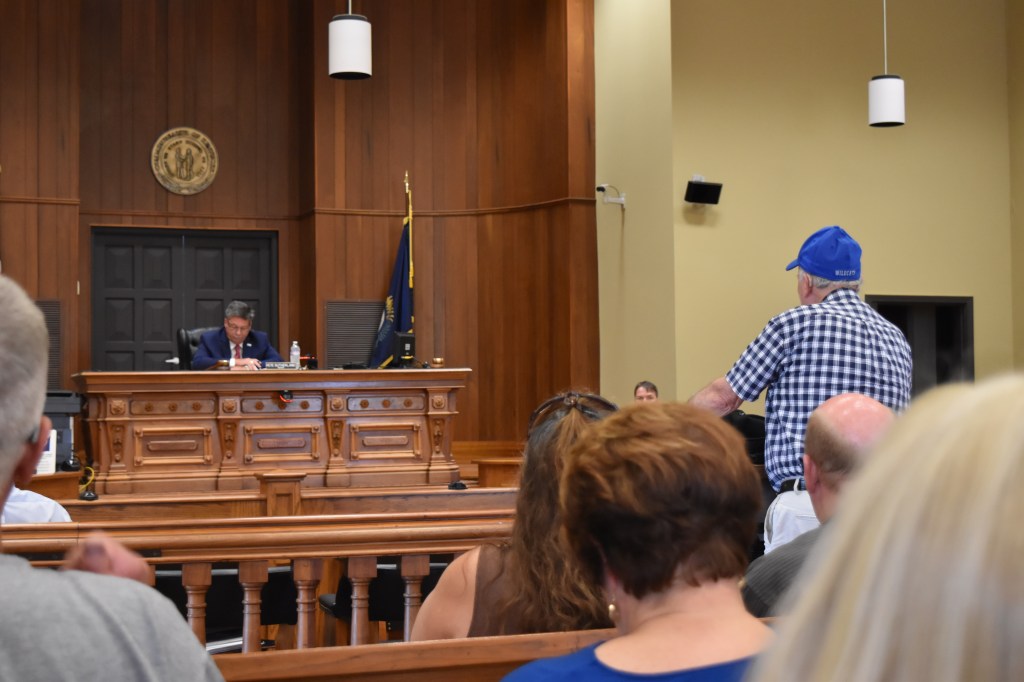 By Brittany Fuller
brittany.fuller@jessaminejournal.com
The Circuit Courtroom of the Jessamine County Courthouse filled with sounds and shouts of disapproval Monday night as the Nicholasville City Commission unanimously voted in favor of the second reading for the intent to annex Lone Oak Country Club.
The motion to accept the ordinance was made by Nicholasville Mayor Pete Sutherland and seconded by City Commissioner Doug Blackford.
“At this time, we will open for discussion,” Sutherland said. “You can come up to the podium and you will be limited to two minutes.”
Sutherland told those in attendance the commission would listen to residents for a duration of 30 minutes before making its final vote.
“We are not voting on the development,” Sutherland said before residents were able to respond. “We are voting to annex.”
Sutherland then told residents if the intent to annex passed, they would be notified most likely by the end of August concerning a planning and zoning meeting where they would be able to come and voice their opinion about the future development of the land, 127.04 acres located at 44 Club Drive.
James Calvin was first to speak to the commission.
“We have been there for 14 years, and we have sent emails and pictures to the city about the problem with water and the sewer system. My backyard floods with sewer. There is a creek in my backyard, and I watch kids go out there and play in it after it has rained. It is sickening.”
Calvin pleaded with the commission by saying whatever happens with the vote, the sewer system needs to be addressed.
“When you start building those houses, where is that water going to go?” Calvin asked. “After all those houses get built, it is going to get worse and worse.”
Jim Kaiser spoke next and encouraged everyone to speak on behalf of the need to keep Lone Oak a green space for residents of Jessamine County. He also urged those in attendance to make a stand and tell the commission to vote no on the second reading to annex the property.
“I know if you vote yes, it goes to 60 days, but in essence that is saying ‘yes, we want to move forward,’” Calvin said. “This plan has been presented. Maybe not officially, but when you request for annexation there has to be a plan in place for that.”
Scott Nevis spoke next and urged the commission to do something special for the kids in the community with the space. He urged the city commissioners to plan something special with the land for the citizens of the county and not develop it. Or, Nevis suggested, the council could table the development and annexation and bring their plans to the citizens and listen to ideas of what resident’s think is a better plan for the space.
Bobby Day Wilson took the podium and told the commission he was calling them out on their intent to annex the Lone Oak Country Club.
“It is a bigger issue than just the west side of Nicholasville,” Wilson said. “Tonight, I am calling out all the elected officials in Jessamine County. The fiscal court, county judge, Wilmore council, Wilmore mayor and you guys the commissioners and the Mayor – I am calling you out to represent the majority of the people who elected you. I am pleading with you, Mayor and commissioners, to let history record you as the ones who can save. This area should be maintained as a green space for all of Jessamine County. I will remind you, government is derived from the will of the people. Democracy is to do the will of the people not the will of a special interest group, no matter how large or how small.”
Lone Oak resident Joe Wilder spoke pleading with the commissioners for kids in the community.
“We really have to think about what this is going to do for our school system,” Wilder said. “If we get 300 homes in that place, what mess is that going to cause in our school system? And our road, our county roads and our city roads, the state highway department, it is going to be crazy. Yes we are voting on annexation tonight, but guess what, this starts the process. We all know that… I plead with you to think about the future of Jessamine County. That is 127 acres of green space that most communities would die for right now… think about our future.”
Several other residents spoke as well, listing their issues with the commissions intent to annex the property. Among the list of things residents brought up were: no group for it, home deprecation, taking away of green space from future generations and no constituents raising their hand in favor of the development and the common sense to not disrupt the quality of life in Jessamine County.