A new home at High Bridge 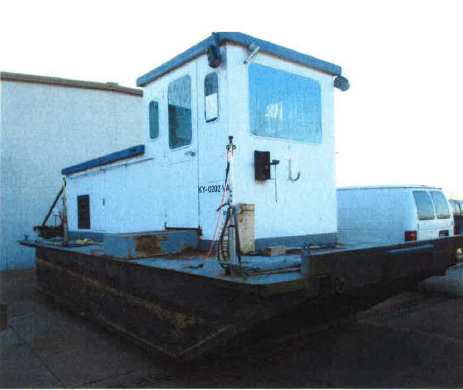 By Brittany Fuller
brittany.fuller@jessaminejournal.com
After 19 years on the Kentucky River, the John Craig tow boat looks like it will find a new home at High Bridge Park.
“It was determined that the preservation of the vessel could best be accomplished if it had a home where it’s story could be interpreted in conjunction with the rich history of the Kentucky River when ferries were the only way to ‘bridge’ across our rivers,” Todd Lockhart, chairman of the Valley View Ferry Authority said in a letter addressed to the Jessamine County Fiscal Court.
The fiscal court heard the recommendation to move the ferry to High Bridge during its meeting last week after the High Bridge Homecoming Festival Planning Committee met earlier this month and was very receptive to the idea, as well.
“We believe it will be an excellent addition to the park, complimenting the paddle wheel on display by the museum and the caboose,” Judy Woolums, chair of the planning committee for the High Bridge Festival said in an email to the fiscal court.
The fiscal court unanimously voted in favor of moving the ferry, with Kent Slusher abstaining from the vote because of his involvement with the ferry board.
With approval, the ferry authority will now arrange for transportation of the towboat from Lexington to High Bridge Park.
The ferry authority will also arrange to have the tow boat set up for historical display, much like the caboose moved to Wilmore in 2014 from the Southern Railroad.
The ferry authority will also provide funds to the fiscal court in the amount of $1,000 to assist with work that may need to be completed after the tow boat has been moved and is placed at High Bridge.
“All the People at the festival, they like going through the caboose,” Magistrate Tim Vaughn said at last week’s meeting.
“They like looking at it and going through it, so I am sure they will at least like looking up at the tow boat. Not that they would be walking in it, but maybe they can get a little better view.”
George Dean was asked by the fiscal court if people will be able to walk through the tow boat.
“Not at present time,” Dean said. “There will have to be some other arrangements, with railings around it, but eventually.”
“I just think the safety will have to be worked out in advance,” Jessamine County Attorney Brian Goettl said. “I would hate to see a kid get up on there and fall off.”
After being used from May 1996 to December 2014, the tow boat was replaced and was used as a backup for four years.
The ferry authority removed the tow boat from the Kentucky River, due to mechanical problems, last fall. After its condition was determined, the authority had several options to consider: recondition the tow boat and make upgrades, advertising it as surplus property or selling it for scrap.
“After discussing these options, the ferry authority felt very strongly that the boat was worthy of preservation because of its historic significance to the counties of Jessamine, Fayette and Madison,” Lockhart said.