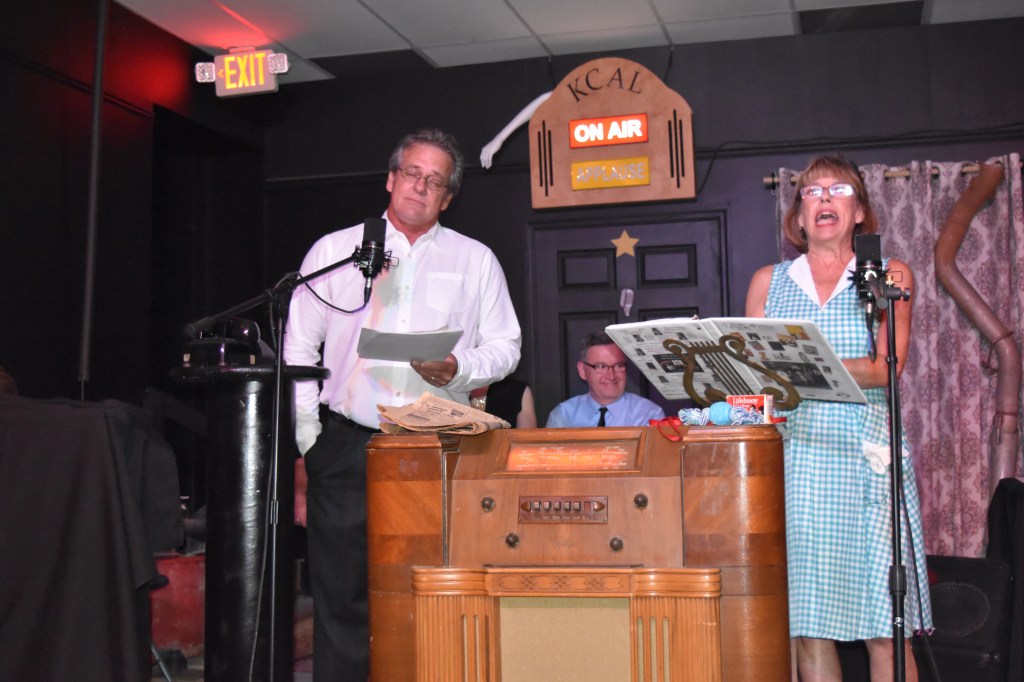 The Jessamine County Old Time Radio Troupe presented Triple Threat Comedy Hour, which consisted of three shows, live in the KCAL Hometown Theatre June 21-23.
The show was co-sponsored by Lib Wilson Insurance Group and Ellen Miller, attorney at law. Husband and wife Norman Cline and Denise Teater Cline played the bickering married couple in the first show, “The Bickersons.”
In the second show, “The Magnificent Montague,” Norman Cline donned a fake beard for the role of Mr. Montague while Denise Teater Cline played his wife, Lily, and Carolyn Threlkeld played the couple’s maid, disguising her voice for the part. Steve Watts wore dog ears as he played a dog in “The Magnificent Montague” and as Billy Holland sang “How Much is That Doggie in the Window” between shows.
During the song and another song Holland performed, the crowd sang along with him. During the third show, “Duffy’s Tavern,” Doug Fain played the role of Archie, the bar manager, Larette Latham Blackford played Ms. Duffy, and David Damron and Steve Watts also had roles in the show. Damron’s wife, Teresa Damron, made homemade desserts for the crowd to eat during intermission.
Fain, a producer and director at KCAL along with Norman and Denise Teater Cline, said KCAL functions entirely on donations, ticket sales and sponsors, and he said the KCAL Old Time Radio show has been going on since December 2014.
Fain said the next Old Time Radio shows will be a fall show Sept. 13-15 and a Christmas show Dec. 13-15. The troupe will also perform “Arsenic and Old Lace” Aug. 3. On Oct. 4, there will be a free KCAL Gospel Showcase at Jessamine Christian Church, where there will be an opportunity to pass the plate to donate to raise money for Thanksgiving dinners for homeless children in county schools.