Honoring those who serve 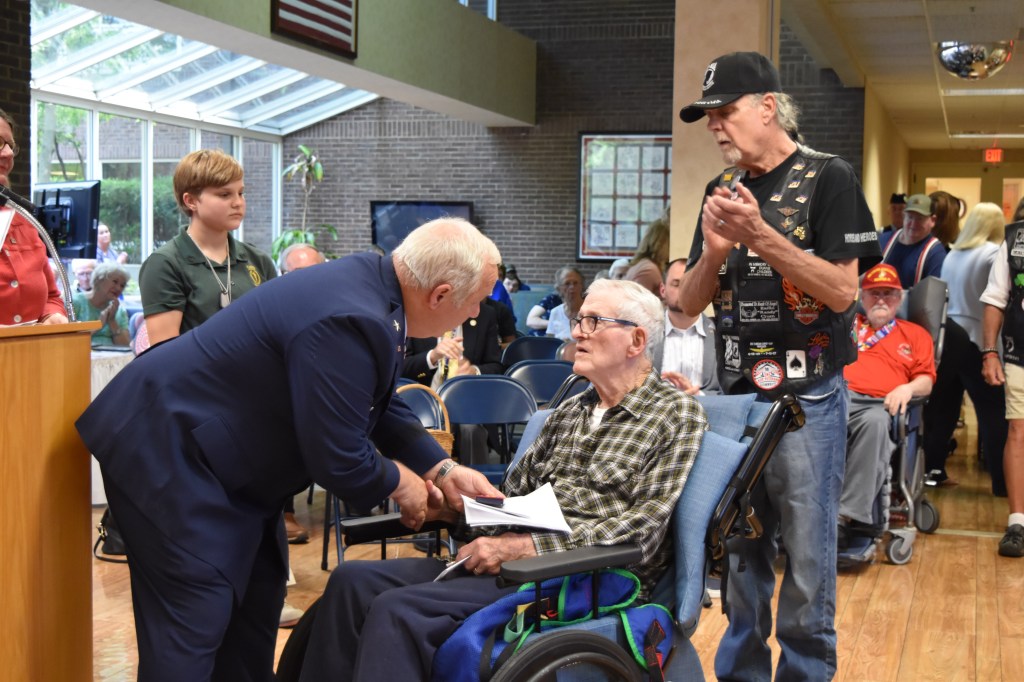 By Olivia Mohr
olivia.mohr@centralkynews.com
Twenty-nine heroes were honored with medals, ribbons and badges at Thomson-Hood Veterans Center last week.
The honors were laid out on tables at the front of the room and distributed to recipients during the ceremony with the help of the Jessamine County Junior ROTC cadets and Rolling Thunder representatives. A bagpipe player played as he walked through the room to close the ceremony.
Guest speakers spoke during the event prior to the ceremony, and after the speeches, veterans made their way to the front of the room to receive their honors. Some of the honors given to recipients were Good Conduct Medals, Combat Action Ribbons, Korean War Service Medals, Vietnam Service Medals, World War II Victory Medals, National Defense Service Medals and other honors. One Purple Heart Medal was also awarded. If a recipient was deceased, a family member accepted the honors on behalf of their departed loved one.
Wilmore City Councilwoman Kim Deyer gave recipients Keys to the City of Wilmore on behalf of Mayor Harold Rainwater, whom she represented at the ceremony. After awards were distributed, Michelle Ewing was also recognized for her 27 years working at THVC.
THVC administrator Ben Sweger was among those who gave speeches during the ceremony.
“These awards and these medals — they have been, in fact, earned,” Sweger said.
During his speech, Sweger said he hoped that during the ceremony, veterans’ loved ones who were present would learn more about their family members’ service and experience.
“That’s always a special treat for us here at Thomson-Hood — to see the families gain insight into why and what their loved one, veteran, had earned,” Sweger said.
The guest speaker at the ceremony was Jon Larson, a Lexington criminal defense attorney and U.S. Army veteran.
He also was a former judge-executive for Fayette County and initiator of the Fayette County Veterans’ Treatment Court, which Larson said gives veterans a chance to get out of jail or prison if they have been incarcerated and get treated for PTSD, drug and alcohol abuse, homelessness and joblessness.
He said he preaches sobriety and parenthood as part of the healing process after the experience of war.
“Sobriety and fatherhood, if done right, are the two things which I know, because I’ve seen it, can transform this generation of dead-beat dads, single mothers and abused kids,” Larson said.
When Larson returned from war in the 1960s, he said he felt like “scum” because Vietnam veterans were seen as losers — there were no parades, medal ceremonies or children looking up to him when he returned home. Larson said he didn’t feel like he had a family anymore. He realized later that he was experiencing survivor’s guilt — many of his loved ones were overseas, still fighting in the war or maimed, captured or dead.
“The most important people in my life, the ones who I promised in my heart to give up my life for were the uniformed losers I grew up to love, and they were somewhere else,” Larson said.
Larson’s military experience has shaped him from a “loser” to a person with pride, he said, and each of the honored veterans’ awards at the ceremony meant something to him.
“Always remember whether you were drafted or volunteered, at some point in your lives, you were willing to die for your country,” Larson said to the veterans.
Present at the ceremony and representing Congressman Andy Barr were Matthew Bradford, a national security fellow at Barr’s office, and Anthony Allen, constituent services manager for Barr. Bradford, who served in the U.S. Marine Corps for seven years, gave a speech during the medal ceremony and said serving was one of the best decisions he ever made. Along with Barr, he strives to protect the freedoms veterans fought for.
“Our service here today is to protect everything that you all fought for and make sure that we can do everything to assist you in any possible way,” Bradford said.