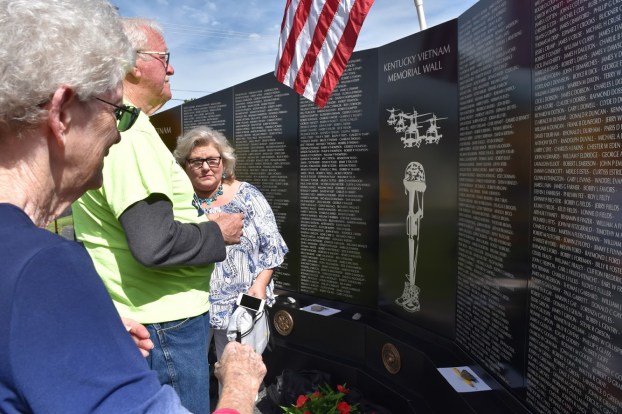 Traveling Kentucky Vietnam Wall made a stop at Wilmore’s Downtown Green Friday and Saturday.
On it were the names of fallen soldiers from Kentucky, as well as names of those taken as prisoners of war or those missing in action.
According to a press release, the Wilmore Police Department along with the Patriot Guard and Rolling Thunder, nonprofit organizations that honor those who were prisoners of war or missing in action, escorted the wall from Southland Christian Church June 14 and detoured it around Thomson-Hood Veterans Center and Wesley Village Senior Living in Wilmore before displaying it at the Downtown Green.
The Traveling Kentucky Vietnam Wall was part of the Summer Spectacular weekend in Wilmore, which included a Flag Day ceremony the evening of June 14 during which there was a presentation of colors and a dedication of a new flagpole at the Downtown Green. June 14 also featured the first Gospel on the Green Concert of the season.
On the night of both June 14 and June 15, a candlelight vigil was held to honor the nation’s veterans.
The season’s first Stonebridge Concert was June 15 and happened prior to the candlelight vigil.
Judy Woolums, director of community development in Wilmore, said the weekend’s events attracted people from many surrounding counties.
Police department chief William Craig said the Patriot Guard and Rolling Thunder enjoy Wilmore because it’s the only town that has helped escort the Traveling Kentucky Vietnam Wall into the community.