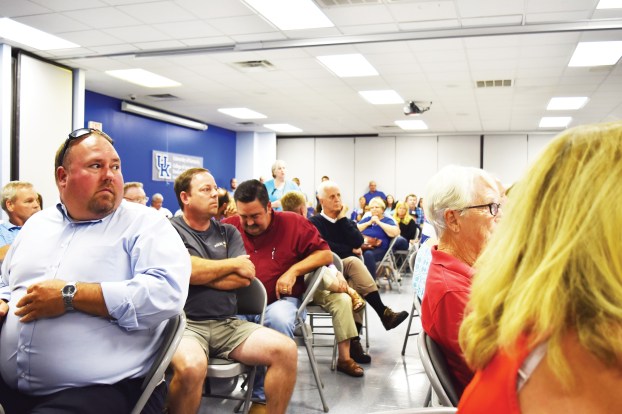 The Nicholasville City Commission approved a first reading of the intent to annex Lone Oak Country Club Monday, which would bring about 127 acres off Club Drive into city limits.

The intent to annex will be in place if the ordinance gets an approved second reading.

More than 100 people crowded into the Agriculture Learning Center building at the Jessamine County Fairgrounds for the meeting and to have their views heard on the proposed intent to annex.

There were more people than there were chairs, and several people lined up along the walls in the room where the city commission met. Tensions ran high as residents of neighborhoods surrounding Lone Oak Country Club shared their concerns about Nicholasville’s intent to annex the property located at 44 Club Drive from the county to the city limits.

After a public hearing, the city commission voted unanimously to approve the first reading of the ordinance.

City commissioner Patty Teater said the city’s decision was based on the fact the property is surrounded by city land. Teater also said she believes accepting the request from the developer to develop on the land, which would be zoned for city residential use, makes sense because the golf course has been failing since 2010. Currently, the Lone Oak Country Club is zoned as county agricultural.

Several residents who were at the meeting Monday were concerned about how the intent to annex and the potential developments of hundreds of single- and multi-family residences with smaller lot sizes than that of county residential lots could affect their neighborhoods.

Among the residents’ issues with the development were concerns about traffic, public safety, whether there would be a possible decrease in property value of their existing homes and how the potential annexation would affect the quality of life for the residents of the area.

“This is a quality of life which you folks have earned by working hard, by paying your taxes, by voting,” retired former county magistrate Bobby Day Wilson said to residents during the public hearing.

Wilson said county residential lots have a minimum requirement of one acre per lot, whereas in the city limits, there can be several more lots per acre. Residents who also worried about how tightly houses could potentially be packed onto the property and the number of new houses spoke about this by expressing concern about how potential new homes could affect their homes’ property values and affect the views they have from their homes. Residents were also concerned about what it could mean for traffic and public safety of the housing development because Lone Oak currently has only one entrance.

Fire Marshal David Jones asked the city commission to take public safety into consideration in regards to the entrance.

“That affects all emergency services, and it’s really critical to any development when there can be more than one way into a development,” he said.

Several residents said the golf course had poor marketing, as they were not aware the course had been suffering.

Tracy Jackson, a resident of the Lone Oak subdivision, said she believes the community would be willing to invest in keeping the property as a golf course, park or pool area rather than an area for new residences.

“Do you not respect this community?” Jackson asked the city commission. “We’re the ones who vote for you all.”

City commissioner Alex Carter said he believes residents could negotiate with the developer about plans.

“As far as keeping the golf course or providing green space, I can’t speak for the developers, but I’m sure that would be an option,” he said. “We, as the city officials, cannot dictate their decision as far as that goes.”

A Lone Oak resident himself, Carter said he has no plans to leave the subdivision.

“I don’t see future property values decreasing in my opinion,” he said. “As a real estate professional, I don’t see that happening.”

Live for the day