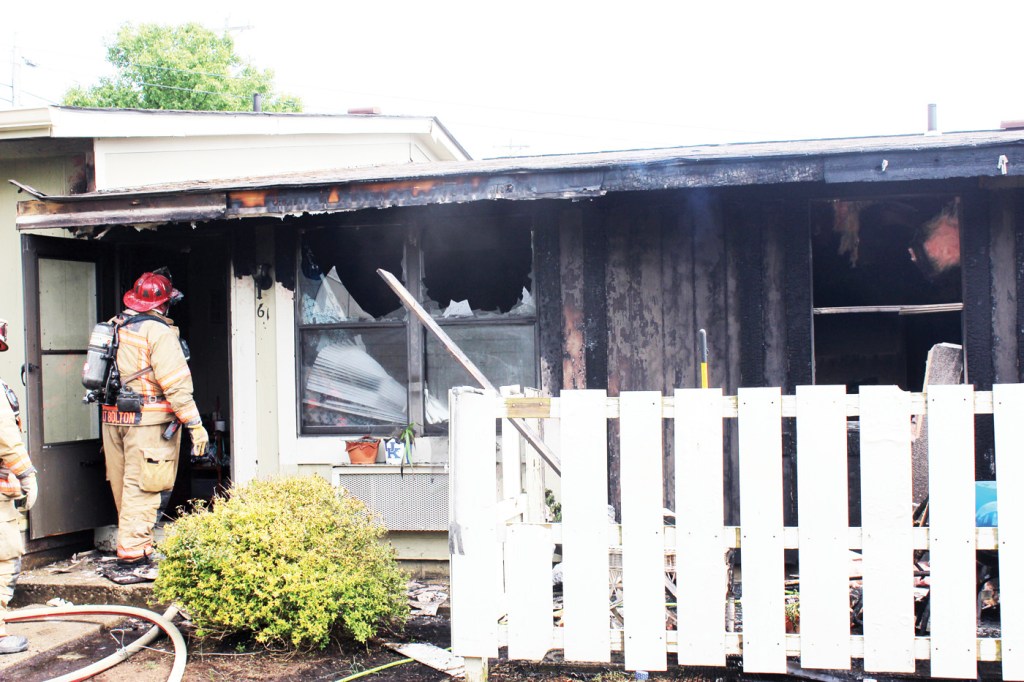 The Nicholasville Fire Department responded to a fire at the Meadowood Apartments on Orchard Drive May 15 at 10:34 a.m. where a woman was trapped and had to be pulled to safety from the burning building.
Nicholasville Fire Marshall David Johns said the fire was delayed in being reported because a maintenance man, a lady and ex-marine were there and trying to get the victim out and put out the fire by themselves. Johns said they also breached the wall inside because they were having trouble getting to the victim.
“The fire was burning pretty good and had already gotten into her room,” Johns said.
Jessamine County Jailer Jon Sallee saw the fire and went to see what he could do about it, Johns said, and tried to help the individual who was trapped. By the time the Nicholasville Fire Department had made it to the location, they went into the apartment to conduct a search and were unable to locate the woman because the fire was burning so bad, Johns said. One firefighter on engine one eventually made it to the trapped individual and picked her up out of the bed.
“She is paralyzed and has had two strokes,” Johns said. “She was not going to get out on her own. He handed her out the window to Sallee.”
Johns said the individual had some smoke inhalation and a burn that resembles a sun burn which was treated by EMS on the scene. From what Johns could tell, the fire had started outside of the building and went in by some means, possibly a disregarded smoking material. The fire, Johns said, was put under control fairly quickly. The structure is damaged and will need to be fixed as a lot of the truces were burnt in the fire.
“Everyone got out alright,” Johns said. “The one lady who showed up initially with the maintenance guy actually went in and tried to find the lady and couldn’t because the smoke… Obviously when you are trying to get someone out there is a little adrenaline. The main thing is they got her out and she is alright. She was happy as a lark.”

‘Community is there to catch you’