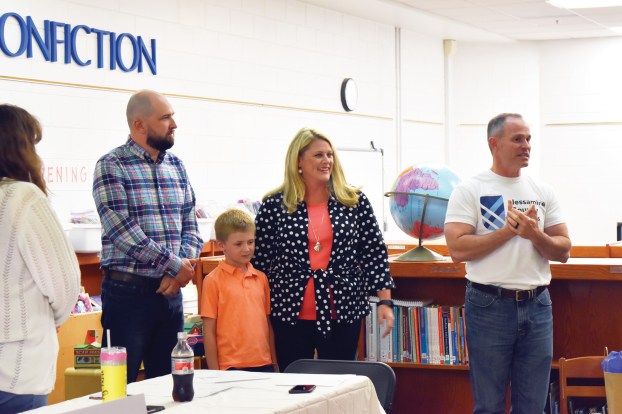 Last Thursday afternoon, the Jessamine Early Learning Village’s School Based Decision Making council voted unanimously to elect Bobbi Hoffner as JELV’s principal for the 2019-2020 school year.
Hoffner will join JELV July 1. The school’s previous principal, Gina Bernard, has been principal since 2014 and is stepping down, according to a press release. Bernard said she will be doing math intervention at Red Oak Elementary School starting this upcoming school year. Hoffner, who taught as a kindergarten teacher at JELV for three years starting about seven years ago, currently holds a position as assistant principal at Stonewall Elementary School in Fayette County. According to a press release, Hoffner has nine years of experience as a teacher and five years of experience as an administrator. She said she is thrilled to return to Jessamine County and JELV.
“I can’t wait to be part of it again, to do great things for kids and just continue to meet the needs of our youngest learners and their families and just keep going, moving forward,” Hoffner said.
Jessamine County School’s Supt. Matt Moore asked applicants for the position what they’d do with the JELV staff of 166 people, and he said Hoffner didn’t seem intimidated by the number during her interview, but instead saw it as a number of talented people in the building. Hoffner said she enjoys the family atmosphere of the school.
“It takes a village, and this is a great one,” Hoffner said.
Hoffner said one of her main focuses will be making time to visit classrooms to get to know students and teachers to get the feedback of teachers and play a more active role in the classroom. She said she doesn’t have plans for attendance, behavior or programs yet, but that in order to make those plans, she’d first need to establish a relationship with teachers and students and learn what the school needs and listen to the plans and feedback of the staff.
“I think they have so many great things in place already,” Hoffner said. “I’m just excited to kind of continue the traditions and engaging things that they already do in the classroom.”
She said she is looking forward to learning with the staff, working to meet the needs of the students and getting to know students’ families.
“The staff is wonderful,” Hoffner said. “I’m excited to get to know the students and really focus on student learning.”
Moore said that when JELV was looking for a new principal, JCS posted about the job opening online, then he screened applicants and sent his recommendations to the site base council, who looked through other applicants and offered their recommendations as well. From there, he and the site base council did reference checks and coordinated interviews.
Moore said Paul Hamann, a former principal at Rosenwald-Dunbar Elementary School, helped facilitate the selection process. Moore said he didn’t play a role in choosing a candidate, but he has experience with HR and is familiar with policy and procedure and has experience making hiring decisions, so he helped the site base navigate the steps of the hiring process.
Moore said during the site base council’s closed sessions, the site base discussed who they wanted to consider for the JELV principal position. Moore met with Hoffner the day prior to the vote and discussed his expectations were she offered the position, but she was not officially chosen as the new principal until the vote during the SBDM council meeting.
During his speech, Moore spoke about Hoffner’s passion.
“The thing I think that made Bobbi stand out so much is she is absolutely passionate about this age group,” Moore said. “When she talks about the things that she wants to do and her, just, personal vision for education, it is very much so in line with Jessamine County’s vision for this population of students. She embraces the fact that students can come to school and enjoy the learning experience while at the same time, moving students in the direction that they need to be moved in, academically and as a whole student.”

The Nicholasville Fire Department responded to a fire at the Meadowood Apartments on Orchard Drive May 15 at 10:34 a.m.... read more