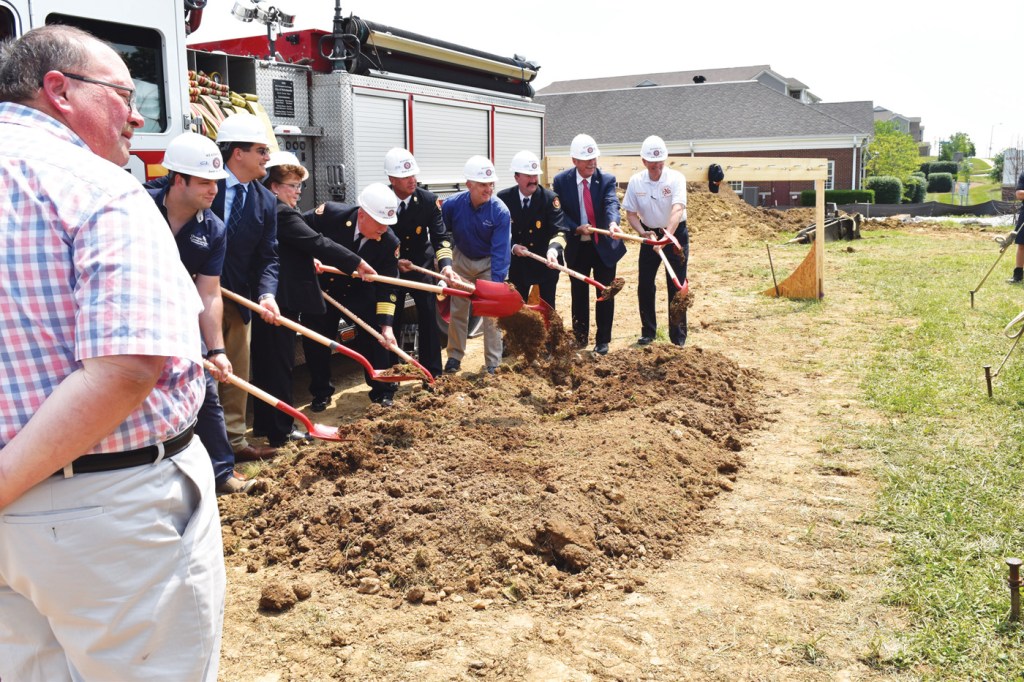 The city of Nicholasville’s groundbreaking for its fourth fire station took place Tuesday at noon at the soon to be new station’s location at 785 E. Brannon Road.
The ceremony included speeches from the Mayor Pete Sutherland, City Commissioner Betty Black, whose administrative areas are police and fire departments, and Fire Chief Mark Case. Katie McDaniel, marketing and public relations coordinator of Wiser Strategies, said the fire station is expected to be completed in about a year. Bob Amato, director of public utilities and finance for the City of Nicholasville, said the construction contract for the project is for $2,813,900.
During his speech, Sutherland said it’s been almost 20 years since the city saw a new fire station open, and the location of the new fire station was in response to the growth taking place along Brannon Road and the northern end of Nicholasville. Sutherland said as the area expands, the city’s need for fire protection has increased.
“It’s coming to life a lot faster than what we thought, so we’re really excited about that, but what that brings is it brings needs, and we need fire protection here, fire protection that’s close by that can be here in a timely fashion, and that’s what we’ve been able to do,” Sutherland said during his speech.
As people move or change locations in Nicholasville, Sutherland hopes new homes emerge on the north side of town and that the area continues to grow.
Commissioner Black said growth in the area was a long time coming, and she’s excited for what it means for the city.
“Now, it’s got a lot of growth here, and it’s going to increase our revenue,” Black said. “We’re going to have people wanting to live here, so I’m excited for that.”
Black reflected on the growth within the fire department. She said the department now consists of 48 firefighters, an assistant chief, a chief and a fire marshall.
Case said over the past five years the department has seen several changes, including an increase in run volume. The department receives more both emergency and non-emergency calls, and he said the department is busier than it’s ever been. Because of this, Case said it currently struggles to provide sufficient coverage for the city, especially for areas farther away from the current stations. The new station, he said, will change that. With the addition of station four, there will be an approximate 50 percent decrease in response times in the area near the E. Brannon Road location, Case said.
“Having a station up here with resources — it’s going to save some lives because we’re going to be there a lot quicker, whether it be a medical emergency, a vehicle accident or fire,” Case said.
During his speech, Case thanked the station’s architect, GRW architect Aaron Nickerson, and congratulated Nicholasville construction company Olympic Construction LLC for being put in charge of the construction of the project.
He said that in the planning of the building, it was decided that the building would have a modern, contemporary design that utilized recent trends in fire station design and that the building would be able to continue to serve the city’s needs 30-50 years in the future. In terms of location, the lot was chosen based on its visibility and ease of access to the road so people know where the station is, and so firefighters can respond quickly to calls.
Case said the station will be a single-story, 7,209-square-foot structure with 4,100 of those square feet dedicated to living and office space. The building will include two drive-through bays large enough to store four pieces of apparatus so trucks and equipment can be stored at the station more easily, polished concrete floors, a PPE storage room, a laundry room with the ability to decontaminate equipment as firefighters come back from calls, a secure visitor entrance, a phone system so if someone comes by the station when no one is there, they can call for help, and an outdoor electric sign in front of the building to post service messages and weather alerts.
“This station is not just for the fire department — it’s for the whole community, especially these people on this end of the county,” Case said. “It’s their station just as much as ours, and they’re welcome to come in anytime.”

‘The client is in control’