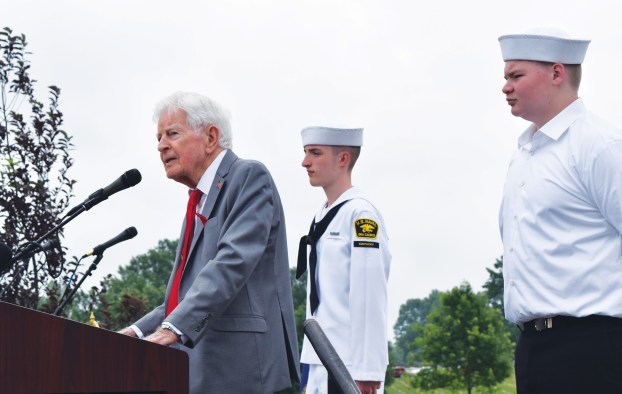 ‘Treasures of their stories’

On Monday morning, a Memorial Day celebration drew a crowd of hundreds in remembrance of fallen soldiers who died for the country and those currently serving in the military at Camp Nelson National Cemetery.
The event featured ceremonies and speeches including 96-year-old guest speaker Walter Cox, who served in the Battle of the Bulge, a speech on the commemoration of the 50th anniversary of the Vietnam War, a ceremonial wreath laying for 21-year-old Chase J. Comley, who died serving in Iraq in 2005, a reading of the names of WWII Jessamine County casualties, performances by the West Jessamine High School band and a fly over by a B-25 bomber.
During his speech, Cox told about serving in the Battle of the Bulge and said he remembers being given orders to pick up the dead during the battle and a truck coming by to later pick up bodies. He said he taught his men how to avoid getting killed by German soldiers and spoke of efforts they took to avoid frostbite in the harsh cold conditions. Many soldiers died of frostbite, not just in combat, he said.
“All those people who died there in their service — they were warriors, and I salute them,” Cox said.
He said when he returned home in May 1946, the tragedy of war had a lasting impact on him.
“I’d wake up at night thinking I was there again, sitting up in bed screaming, hollering,” Cox said. “It took about five years for me to get over it.”
At the time, there wasn’t much knowledge about how medical professionals could help veterans with the trauma they experienced during war.
“We were sent home, and we had to deal with it, and that’s what we did,” Cox said.
A portion of the ceremony was a speech on the commemoration of the 50th anniversary of the Vietnam War delivered by Skip Kraemer, a Vietnam War U.S. Army veteran. The Central Kentucky Veterans’ Committee, the Daughters of the American Revolution and other organizations are partners in an organization to commemorate the Vietnam War. The organization started in 2012 and will last until 2025.
Kraemer, earlier in the ceremony, he had asked Vietnam veterans to go to the DAR shelter to receive a lapel pin, a certificate thanking them for service and a proclamation from the president, as 125,000 Vietnam War veterans live in Kentucky and 1,103 Kentucky soldiers died in Vietnam, two of whom he knew. He said after Vietnam veterans served, they were often ignored or met with unfriendliness because of the political climate at the time.
“It’s likely many of us Kentucky warriors carry both seen and unseen scars from that war,” Kraemer said. “Perhaps it’s because some of us returned home to a nation or neighborhood that was unfriendly at best — no flags, no parades, no welcome home party.”
Kraemer’s unit asked him to change into civilian clothing once he landed in the U.S. to hide that he was a veteran, but he didn’t because he was proud to show his uniform and medals. He expected to see a formation welcoming him and other veterans, but it didn’t happen.
“Basically, we were ignored,” Kraemer said.
Two years ago, Kraemer said his sons and wife convinced him to visit the Vietnam Veterans Memorial in Washington, D.C. He said he feels grateful they persuaded him to go because the monument made him feel his services and the services of other veterans were acknowledged, and he found the names of the two Kentucky soldiers he knew who died in Vietnam.
“I traced their names on the black, polished granite 50 years late,” Kraemer said.
Kraemer hopes all veterans will be acknowledged and respected in the future.
“In the last 50 years, we have learned that military’s mission is to execute policy, not to make it, and the soldiers don’t choose their wars,” Kraemer said. “I hope we can resolve to never again allow our veterans and their families to be left alone to somehow feel outside and left to fend for themselves.”
DeWayne Lee Brewer, a retired U.S. Army chaplain with the rank of colonel who served in Afghanistan and served in Texas when he was deployed for Iraqi freedom in support of divisions in Iraq, attended the Memorial Day ceremony. Brewer said he appreciates the ceremony because it allows him to continue honoring veterans and fallen soldiers, and his favorite part of the ceremony was hearing the stories of fellow veterans, like Cox and Kraemer.
Brewer said he loved seeing all the young people at the ceremony because he believes stories of service should be passed down through families’ generations, and he hopes those who attended the ceremony who have not served gained a respect and appreciation for soldiers’ services.
“And I hope that they had the opportunity to get what I get every once in a while — those treasures of their stories,” Brewer said.