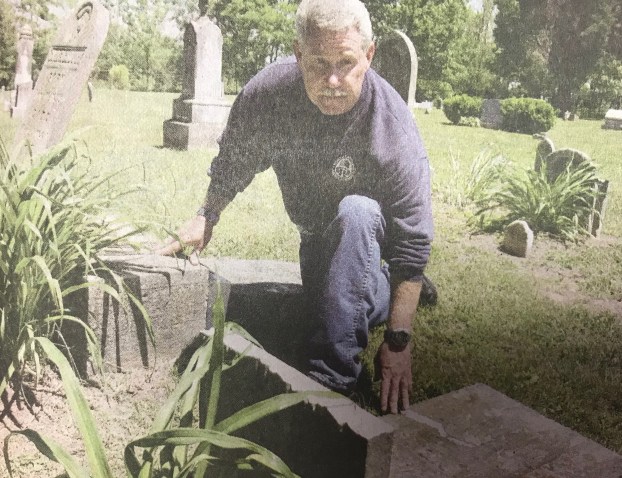 Looking back published in the Jessamine Journal 5.23.19

Vandals wreck havoc in Ebenezer cemetery: Vandals toppled over 12 to 15 tombstones over the weekend, and some were broken. The church where the cemetery was located was broken into three weeks prior. The Ebenezer Church Cemetery Association turned their attention to putting the stones back in place.
Final four sire leaving stable for cougar den: Two months prior, West Jessamine boys’ basketball Coach Robert Hammonds had led the Colts to semifinals of the National City KHSAA Boys Sweet 16 state tournament. However, he ended up accepting a head coaching position at Letcher County Central High School in Whitesburg for the Cougars.
School district cuts 117 positions: To prepare for anticipated budget cuts in state funding that were going to happen in the fall, the Jessamine County School District made staff cuts of 117 positions, 10 percent of the district’s number of employees. In the years before, similar cuts were made and most people were rehired, so the superintendent expected that most people would get rehired.
Chrysalis House 5K run Saturday: Chrysalis House, Inc., an organization that seeks to help women recovering from substance abuse, planned to host its 10th annual 5K Run/Walk to raise funds and awareness for the center’s rehabilitation programs.

Relay for life: The American Cancer Society had its third annual Jessamine County Relay for Life over the weekend to raise money for cancer research and treatment. About 250 to 300 people showed up at the West Jessamine Middle School track to participate.
Camp Nelson gets $600,000: A $600,000 federal grant from the state Transportation Cabinet provided funds to finish the historic Oliver Perry Mansion at Camp Nelson as it was nearing completion.
Citizens National Bank opens in Wilmore: On Monday, Citizens National Bank opened a branch in Wilmore, the fourth location in Jessamine County.
Highbridge pays for cancer treatment when insurer won’t: Kate Spencer learned she had ovarian cancer and that her insurance company wouldn’t pay for a $50,000 procedure that would give her a chance to live. She and her family planned to raise the money themselves, but her boss, Linda Griffin Slagel at Highbridge Springwater, told Spencer the company would pay for her procedure.

Contractors put roof on school, almost ready to polish off inside: An elementary school being built on Etter Drive was expected to be finished within the week. After putting on the roof, workers would then finish the interior.
Church of Christ minister selected: David P. Leach, a 22-year-old May 5 college graduate, had accepted a ministerial position at Nicholasville Church of Christ.
Tuesday primary ballot carries 10 races each for dominant parties: Described as “one of the largest primary election ballots in memory,” Jessamine County residents were to look at eight statewide Democratic races and two county races with a total of 59 candidates, as well as nine statewide Republican campaigners and one local candidate with a total of 28 candidates.
Nicholasville Men Pedal Bikes 210 miles in Ohio Tour: Two bike enthusiasts from Nicholasville finished a two-day, 210-mile tour of Ohio’s Scioto River Valley.

Dems red hot primary gives voters final say on Tuesday: Voters in Jessamine County would have 24 contests to decide during the primary election Tuesday. There were 77 candidates contending for Democratic nominations.
Rural Jessamine roads cleared for $553,000 expenditure under rural secondary highway program: Rural roads in the county would undergo construction and resurface work, and the expenditure under the Rural Secondary Program would be the heaviest in about 15 years for the county.
Fiscal Court plans to disband briefly: There would be no Fiscal Court session this day to allow the county clerk time to prepare ballot boxes for the upcoming democratic primary election.
Parade slated Memorial Day: Rev. Jack Habberfield announced a parade was scheduled on Memorial Day, and he was working on plans with the American Legion and several civic clubs.

Arrests published in the Jessamine Journal 5.23.19