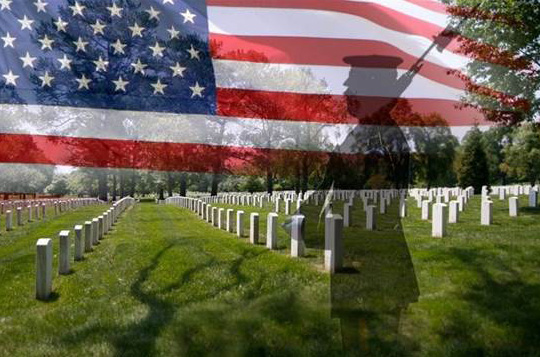 Camp Nelson National Cemetery and the Central Kentucky Veterans Committee will host a Memorial Day Ceremony at 11 a.m. Monday, May 27.
“It is our privilege to honor the service men and women that have gone before us — some 15,200 are residents of the historic hallowed grounds of Camp Nelson National Cemetery,” according to to a press release from Camp Nelson and CKVC.
This event is free and open to the public.
December 2019 marks the 75th anniversary of the Battle of the Bulge.
During the one-hour ceremony, a restored vintage World War II B-25 bomber will conduct a Military Fly Over to honor all World War II service men and women. This model aircraft flew off the USS Hornet and was one of 16 flown by Doolittle’s Raiders in 1942 during the first bombing raid on Tokyo.
The keynote speaker will be Walter Cox, a U.S. Army captain and 96-year-old practicing attorney.
Cox was on the front lines of the Battle of the Bulge — the battle Winston Churchill called “The greatest American Battle of the War.”
The ceremony will also include a commemoration of the 50th anniversary of the Vietnam War, a reading of the names of the 34 Jessamine County WWII casualties, patriotic music by professional performers with the West Jessamine High School Band, a reading of the meaning of the 13 Folds of the American Flag and ceremonial wreath laying.
The event will conclude with the playing of Taps by Eagle Scout and West Jessamine High School student Nate Strombaugh.
The Central Kentucky Veterans Committee is a team of dedicated committee members from all walks of life and many different talents. The CKVC’s mission is to honor fallen and living veterans, as well as their families, with ceremonies recognizing their military service. The CKVC annually organizes and conducts the Memorial and Veterans Day ceremonies at Camp Nelson National Cemetery.
The CKVC encourages everyone to arrive by 10:00 a.m., to avoid traffic. Once the cemetery parking is full, attendees can park at Heritage Park and take the shuttle. Volunteers and golf carts will be on hand to assist.

‘You look good in everything we do’