Asbury honors the Class of 2019 at commencement 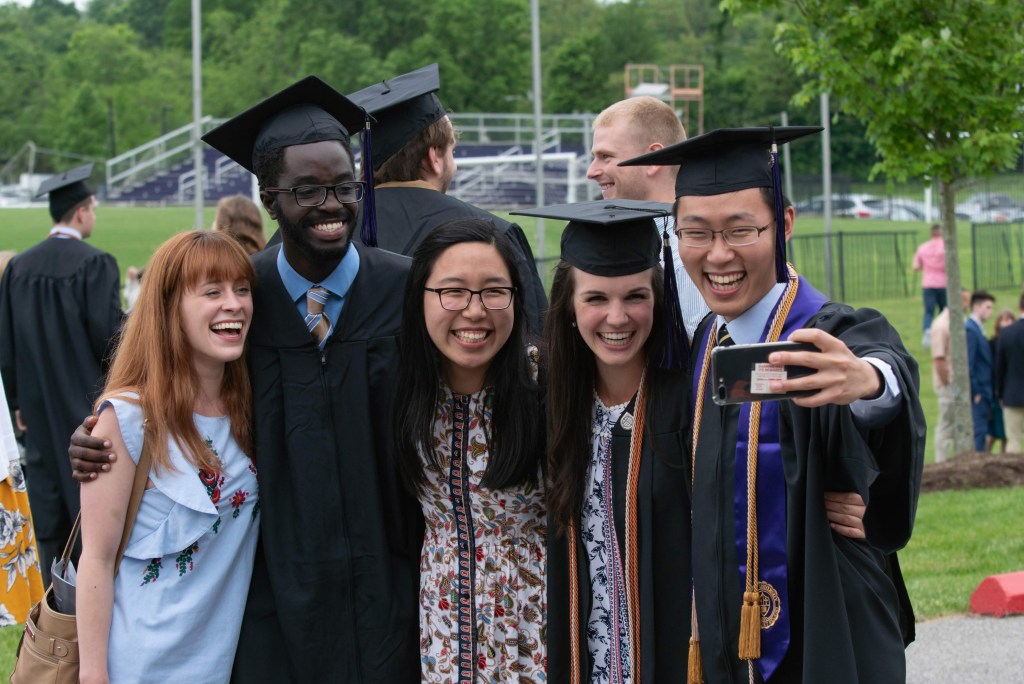 Asbury University honored the newest members of the Asbury alumni community during commencement ceremonies on May 11.
Marking the official transition from students to alumni, the Class of 2019 is now part of the Asbury alumni network, joining more than 22,000 graduates, who inhabit more than 80 countries and all 50 states, and are working to advance the cause of Christ around the world.
Commencement Weekend 2019 began Friday, May 10 with an evening Baccalaureate service and reception. Asbury President Sandra C. Gray served as the Baccalaureate speaker during her final commencement weekend before her retirement this summer. Gray is considered an honorary member of the Merciful Class, as she prepares for her departure from the university after reunion.
Following a prelude from music department seniors, Gray highlighted the importance of Isaiah 43, specifically verse 19, which states, “See, I am doing a new thing! Now it springs up; do you not perceive it? I am making a way in the wilderness and streams in the wasteland.”
“Students, God is calling you into new territory,” Gray said. “He’s about to do a new thing; the likes of which you have not seen. He wants you to begin seeing Him through the eyes of your heart.”
She encouraged students to ask themselves what influences they are listening to, and to seek Christ’s voice above all others.
Gray highlighted the many God-given passions of the Merciful Class and the ways in which they are now equipped to go into the world and make an impact for Christ.
“I see Asburians who will take on great roles in public and elected offices,” Gray said. “Christian voices, frankly, are too scarce in the public realm. We need spirit-led Christians who understand that truth exists and that it exists in the person of Jesus Christ. Someone has to show up to confront the ugliness of our age and I see this in you. I see among you Asburians who assert themselves in positions that can turn the tide against the suffering of human trafficking, substance addiction and abuse. I see opportunities for Asburians who believe God for what He can do. Believing God for what He can do means there’s no limitations.”
Following the service, graduates and their families connected with faculty members in Kinlaw Library during a reception.
On Saturday, the university hosted two commencement ceremonies, one for graduate, adult and online students at 10 a.m. and another for traditional undergraduate students at 2 p.m. Both ceremonies were held in the University’s Luce Center.
Prior to the conferring of degrees, Dr. Steve DeNeff, pastor of College Wesleyan Church and author of “Fault Lines,” spoke to graduates and their families. DeNeff challenged graduates to consider the ways in which they can be “good” in a time where the culture is focused on “greatness.”
“You’re great by what you do,” DeNeff said. “You’re good by what is inside of you. Great people stand out; good people fit in. Great people distinguish themselves; good people hide themselves. Great people make better celebrities, but good people make better spouses and better neighbors.”
DeNeff encouraged graduates to continually examine what ladders they are attempting to climb and if they are being fueled by the ego or a humble heart after Christ. He also charged Merciful Class members with the task of redefining greatness.
“The question you must ask yourself is, ‘am I trying the right ladder?’ If you try the wrong one, it’s not that you’ll fail, it’s that you’ll succeed and when you get to the top, you’ll find out that it’s not what you thought it was,” DeNeff said. “Every accomplishment you make, you’ll have this nagging sense that there’s still one more thing you’ve got to do.”
DeNeff left graduates with the message that, above all else, a devotion to Christ is what ultimately satisfies and unleashes positive change in the world.
“I believe in the possibility of God releasing onto the world an army of people that are devoted to nothing more than Jesus Christ,” DeNeff said.
More than 200 traditional undergraduate students were honored during commencement weekend, marking their transformation from Asbury students to alumni ready to use the skills they gained in their studies at Asbury to impact the world for Christ.