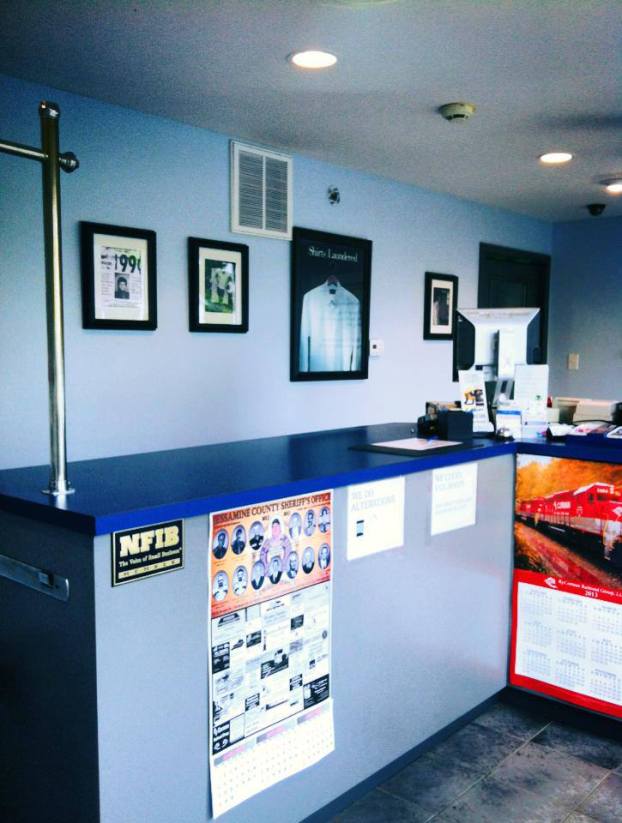 ‘You look good in everything we do’

By Anne Carmicheal
For the Jessamine Journal
Lillian (Sadie) Thompson lived in Nicholasville, most of her life, but a trip to Maine changed the course of her life.
While in Maine, Lillian got a job at a dry cleaner and began to learn the business. When she returned to Nicholasville with her husband, Richard Thompson, she took a job at a dry cleaner on York Street owned by Shirley and Paul Locker.
In 1975, Lillian and Richard bought the business, by then relocated to Oak Street, from the Lockers.
As the business grew, they moved Jessamine Dry Cleaners to a larger site just two doors up, where it remains today at 215 E. Oak St. The shop is open from 6 a.m. to 6 p.m. Monday through Friday and 8 a.m. to 3 p.m. Saturday. The shop is closed on Sunday.
Jessamine Dry Cleaning also does alterations and preserves wedding gowns and other items from the important events in your life.
At the time they purchased the Jessamine Dry Cleaners, Richard was working in construction, but the rapid expansion of the store and Lillian’s insistence necessitated he come into the store and help run the business.
“My mother had an amazing work ethic and she instilled that in all of us,” daughter Paula Thompson Elder said in a podcast with Doug Fain in 2015.
By 1993, she began to talk about retirement. Daughter Paula Elder and her husband, Mike, took ownership of the store, but Lillian kept coming into the store and phoned several times a day.
“My mother had a heart of gold. If she had $10, she’d give you $12. She always did the civil servants (police, fire, EMS) uniforms at no charge, until they grew to such large numbers we just couldn’t do that anymore, but we still give them a discount,” Elder said. “When somebody had a death in the family and needed a dress or suit cleaned for the funeral, we didn’t charge them, and we always made sure to get their order to them in the time frame they needed it. We still do that.”
In 2008, Elder’s son had health issues which required her to be away from the store frequently, so her niece, Crystal Blackmer and her husband, Joey, took over the shop.
“We definitely wanted to keep the business going and keep it family operated. People here in Jessamine County support local businesses. We have some of the same customers my grandmother had when she was here. They’re loyal and we want to give them the same kind of service that she did. We know them, and we know what they like,” Crystal Blackmer said.
Crystal arrives most mornings around 3 a.m. and puts in her full day by about 10 or 11 a.m. Just as before, family members continue to help run the operation.
“I was bagging clothes and sorting them numerically by the time I was seven or eight years old,” Elder said. “My mother had a heart condition and spinal stenosis that limited the frequency of her visits to the store and ultimately necessitated the use of a wheelchair. In 2011, she had a fall in which she injured her head and by 2012, she was having frequent falls and was also battling emphysema.”
Lillian Thompson succumbed to her illnesses in 2013, but she is still remembered by the community as a passionate, hard-working business owner, as well as one of the most giving people in town.
Today, Brian Blackmer, one of the fourth-generation family members who works part-time at Jessamine Dry Cleaning, discussed the changes that have kept Jessamine Dry Cleaners at the forefront of that industry in Jessamine County.
“We’ve had to make significant changes to the equipment and the products used in each process over the years. EPA regulations require we use more environmentally-friendly chemicals. Also, newer fabrics mean we have to use different processes to protect the colors and fibers of the materials,” Brian said. “When you bring us an article of clothing or other items (such as table linens, rugs, comforters, etc.), they are brighter. Just as we’ve always done, we give you the best prices, the highest-quality work and best service you’ll find anywhere.”

Staff Report Chris Hawboldt has been selected as the next head principal at East Jessamine High School, after serving as... read more