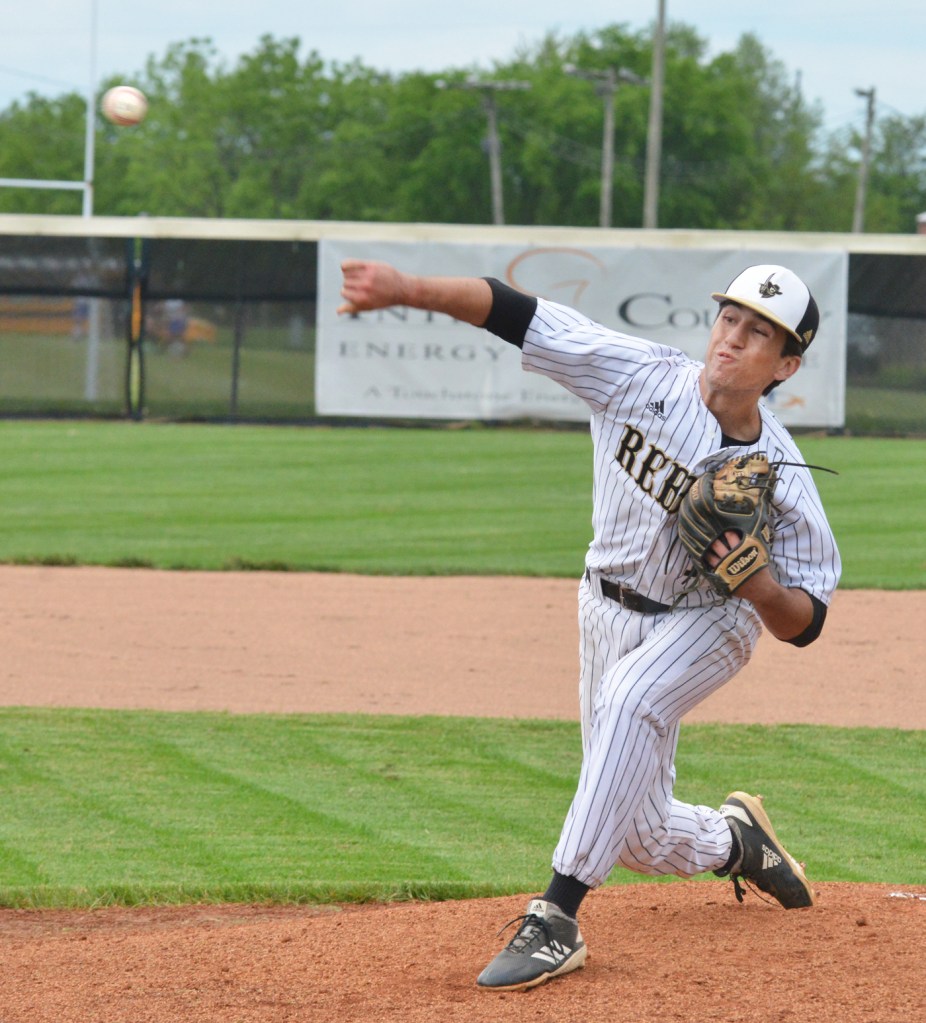 By Joe Mathis
For The Jessamine Journal
It’s been nearly three weeks since the last time Boyle County baseball has scored more than three runs in a game. However, if every game ends the same as Monday night’s then they’ll be just fine with the results.
Boyle County won their second straight game in extra innings, topping West Jessamine 2-1 and scoring their two runs in about as opposite of fashion as a team can score them.
Rebel pitcher Karson Thompson and West Jessamine pitcher Nathaniel Frank both put on a clinic, blanking their opposition through the first two frames before West Jessamine struck for the games first–and their only–run.
In the top of the third, Colts shortstop Jackson Green grounded a one out single through the middle and into center field. One pitch later,  Nick Lee bounced a ground ball to second base, moving Green into scoring position with two outs.
But with the Rebels one out away from stranding a runner in scoring position for the third straight inning, Thompson bounced a pitch to Boyle catcher Jack Briese behind home plate. Briese quickly picked the ball up and fired to third to try to retire Green who broke for the bag on the play but the throw sailed over third baseman Conor Sammon’s head and into left field. The errant throw allowed Green to then trot home and put the Colts up 1-0.
The lead was short-lived.
Two pitches into the bottom half of the fourth, Thompson roped a double off the left center field fence–a ball that just missed clearing for a home-run by a couple of feet.
Briese followed Thompson’s ringing double with a sacrifice bunt to move Thompson to third, leaving Boyle Coach Kyle Wynn with a decision to make. That decision led him to call one of baseball’s riskiest plays to tie the game up: a suicide squeeze.
And the Rebels executed it to perfection.
As Thompson broke for home from third base, Ethan Carter’s bunt lazily rolled in between the pitcher and third base line. Frank picked up the ball and had only one place to throw to taking the out at first base and seeing Thompson cross the plate to tie the game up at one.
“I was getting ready to make the call and Ethan (Carter) had already talked to Karson (Thompson),” Wynn said. “They already kind of had it in the back of their mind so it’s good to see that we are understanding the game and the guys are seeing that stuff. It’s kind of a different approach but timely hitting is all we need with our pitching and defense working the way it is.”
The Rebels pitching continued to work well.
Thompson delivered zero after zero after zero on the scoreboard allowing only three base runners to reach base from the fifth through seventh innings to hold the Colts to one unearned run through his seven innings of work.
“He gets in a groove and when he’s strong like that it makes him better,” Wynn said. “That’s his mentality and that’s his thing. His pitches are working and they were all working tonight. His pitches were running and he did a nice job.”
And Thompson was matched by his counterpart Frank, who after allowing the run to score on the suicide squeeze, struck out the side in the fifth, worked around a lead-off double in the sixth and a lead-off walk in the seventh to send the game into extra innings tied 1-1.
After seven innings, surrendering only four hits, and striking out three Thompson gave way to Briese on the mound.
Briese allowed a lead-off base runner but the Colts could do nothing with it, moving the game to the bottom of the eighth and setting up the stage for Eli Glasscock to play the hero.
Like the Rebels did in the top half of the eighth, the Colts called on their bullpen, bringing in Braden Welch to work against the three Rebel hitters due up in the bottom half of the frame.
The inning started off innocently enough: back-to-back strikeouts by Welch put the game one out away from moving into the ninth. That is, until Glasscock stepped in.
Glasscock saw two pitches sail outside the strike zone and with a 2-0 count looked for a fastball. He got the pitch he was looking for and didn’t miss it, sending a deep drive to left field that cleared the fence and sent Boyle County into a frenzy celebrating a 2-1 win on a two-out, walk off solo home-run.
The blast was Glasscock’s first career home-run.

Kibler commits to the University of the Cumberlands