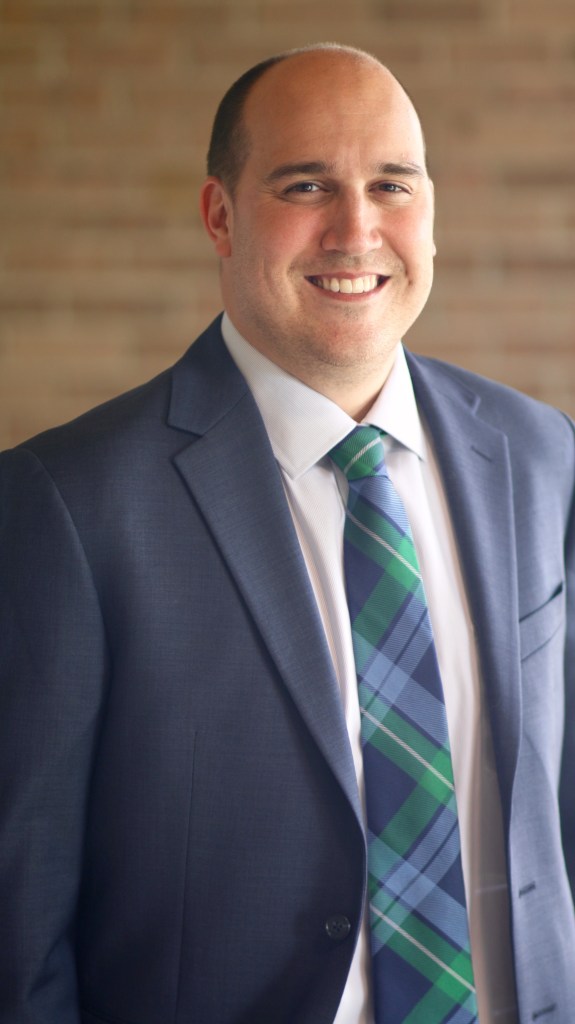 Chris Hawboldt has been selected as the next head principal at East Jessamine High School, after serving as EJHS curriculum resource administrator, and will officially assume his duties as principal July 1.
“We had several strong candidates and Chris really stood out because of his energy, enthusiasm and his obvious love for East Jessamine High School,” Supt. Matt Moore said.  “During his time with the EJHS family, Chris’s focus has always been on students and helping them grow, not only academically, but also as individuals.
“His student-centered approach, combined with 10 years of experience as a dynamic teacher, an innovative administrator and a results-driven leader have prepared him to build on EJHS strengths and take the school to the next level.”
Hawboldt has been with the Jessamine district since 2016, during which time he has been involved with a number of initiatives to better connect with students and improve academic success.
During Hawboldt’s tenure as an EJHS administrator, the class of 2017 recorded the highest college and career readiness rate in Jessamine County history at 98.9 percent, with the Class of 2018 again achieving a county record with a 96.4 percent graduation rate.
Hawboldt has filled a variety of leadership roles within EJHS and the district, including serving as building assessment coordinator, assisting with the development of a JCS graduate profile, serving on the Work Ethic Seal and Professional Series Committee, and helping to lead the district’s Culturally Responsive Teaching and Learning Coalition.
Prior to his tenure with JCS, Hawboldt was a teacher and head coach at Fayette County’s Tates Creek High School, where he also served as a pre-service teacher supervisor.
Hawboldt earned bachelor’s and master’s degrees from the University of Kentucky and holds a master’s in instructional leadership from Eastern Kentucky University.
Jessamine County is home to Hawboldt and his wife, Abby, and their three children, ages five, three and one.
“When I came to work for Jessamine County Schools, I was so impressed with the district’s focus on students and meeting their needs. Abby and I decided to move to Jessamine County to become even more of a part of this community and we want our kids to have the same incredible experience that I see other students having each and every day. I’m proud to share that we plan to have Hawboldt graduates in the EJHS Classes of 2031, 2033, and 2035, and I would love to be the principal that gets to hand over those diplomas. That’s how much I believe in EJHS.
“I have a passion to bring the highest quality instruction and high school experience to the students of EJHS and we’re going to do some amazing things together.”