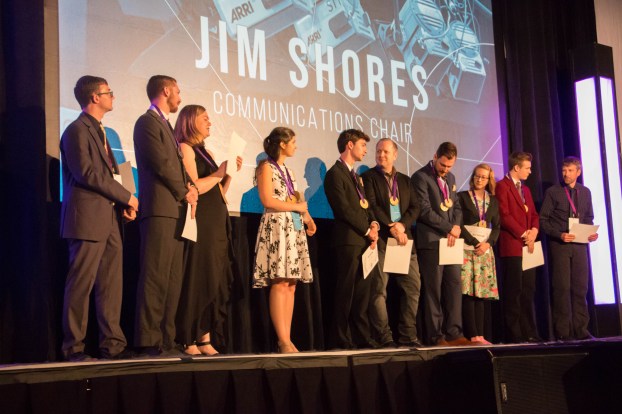 By Fiona Morgan
For The Journal
Hosted by junior Allison McBride and sophomore Chad Carmack, the 15th annual Highbridge Film Festival took place April 27 in Hughes Auditorium featuring 10 undergraduate student films, two graduate student films and one high school film.
Asbury’s jazz band set the mood as the crowd filed in, and afterward attendees celebrated the hard work of the filmmakers with a reception in the Miller building.
This year’s judges were Michael Swanson, an NBC executive and CEO of Faith Filmworks; Nicole Baer, who has edited 62 episodes of CW’s “Supernatural” and won awards at numerous film festivals; and Dean Batali, formerly a writer for “That 70’s Show” and “Buffy the Vampire Slayer.”
Junior media communication major Oleksandra Shuliahina won four awards for her short film “Psalm 19, ” including best cinematography, best musical score, audience favorite and a tie for best super-short. The film was a collection of nature shots, which included mountains, oceans and forests while a narrator read Psalm 19 to an original music score by Shuliahina.
After receiving the first award for best cinematography, Shuliahina said she did not expect to win any more awards that evening.
“It was a shock to me,” she said.
Shuliahina’s emphasis in her major is audio production, and she has a minor in music.
“It was the first time I’d composed an original music piece, so I was most excited for that,” she said,
Shuliahina said she was nervous to submit the film because it did not have a narrative like most other Highbridge films do.
“It’s just such an honor people were so touched by it,” she said.
Merciful Class member David deMena won best screenplay and best picture undergraduate for his musical film “The Date Debate.” The story follows the journey of two star-crossed lovers who hold vastly different beliefs.
“The way I like to describe it is if you took Romeo and Juliet or West Side Story but made it about a democrat and republican,” said Kari Brown, the film’s producer.
Each character is challenged to win the other person to his or her respective political party in three dates.
DeMena said the most difficult part was having to complete the musical score before shooting.
Recent Asbury graduate Adam Rousey, who studied music, composed the score.
“I had to describe how the film was supposed to look like without him really being able to see it,” DeMena said.
DeMena continued to say he was able to have a team of the best people he knew and was grateful for the awards.
“Screenwriting specifically is the thing I work the most at; it’s one of my favorite things in the world and to win for screenwriting means a lot,” he said.
Another dual-award winner is senior media communication major Samantha Bruce. She won best production design for “The Date Debate” and a special mention award for the costuming of the web series “Battle for Star City.”
This year was the first time Bruce worked on films that made it into Highbridge.
“I’ve put everything I have into every single one of the films I’ve worked on this semester, and to get the recognition of, ‘You did it; we liked what you did,’ feels really good,” Bruce said.
Though she won an award for production design, Bruce never thought that would be her preferred area of work.
“I always thought I was gonna be a writer, director or whatever when I first came in. I kind of accidentally fell into these roles of production design and props, … and I just suddenly realized I love it, so now I really want to pursue that,” she said.
After graduation, Bruce and two friends plan to start a production company in Lexington. They will produce web-based series, shorts and other content mostly for YouTube. Their first web series, “Battle for Star City,” will be released June 7.
Graduate student Joseph Pritchard won best graduate documentary for “Soul Purpose.” The film focuses on the story of Jared Plesec, a 21-year-old Salvationist who was killed in a senseless act of murder.
Lexington high school junior Nicholas McCamish won the high school award for “The Last Dot,” a short comedic story about the game Pacman. McCamish created the film using a 3D animation software called Blender. He has been using animation software since he was 11 and was inspired by other YouTube creators’ Pacman videos.
“I loved seeing people clap and laugh at the different moments,” McCamish said.
McCamish is considering Asbury as one of his college choices, and he hopes to study either film or business.
The last award, the first-ever Highbridge Inspire Award, was given to Asbury President Dr. Sandra Gray, who will soon take her last bow as president.
“It was one of those moments that I just thought, ‘I don’t know if I can hold the tears back or not,’” Gray said. “I just was very touched and humbled by their expression of their love for me.”
Gray said she loves the energy, excitement and variety of Highbridge.
“I thought we just had a really good, an eclectic, selection of films,” she said. “The music, the cinematography, the acting — they each had their highlights.”
Although Gray is leaving the presidency, she said she will continue to attend Highbridge Film Festivals.
“Highbridge gets better every year,” she said. “I want our students to leave this place using screen as a platform.”