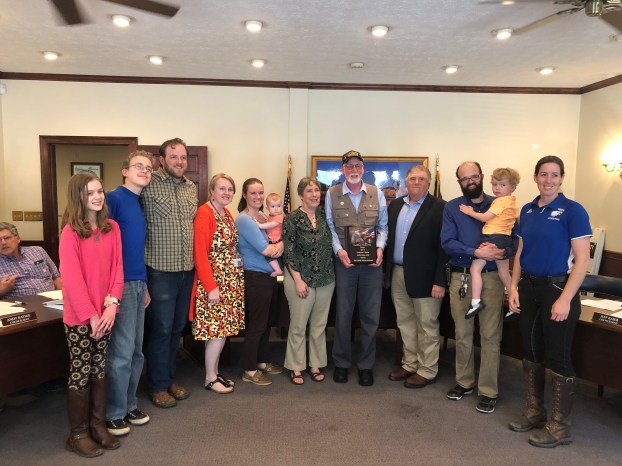 By Brittany Fuller
brittany.fuller@jessaminejournal.com
Vietnam veteran, Fred Keeley, was the six thousandth veteran honored by Freedom Fest at Monday’s Wilmore City Council meeting and shared just one of his stories from his time serving his country.
“I am quite honored to do this,” Todd Couch said at Monday night’s meeting presenting Keeley with his award. “I just want to start by thanking the Mayor and the council and the city of Wilmore for allowing us to be able to honor veterans and all the work they do.”
Gooch said the city of Wilmore is special to him because he spent his childhood walking the streets and spending time around the seminary and the college.
“It is the kindest most thoughtful place on earth in my opinion,” Gooch said.
Gooch was honored to help and the community present the award, and said everyone owes the veterans in America so much. He brought up the bible verse John 14:13, “Greater love has no man than this than one would lay down his life for his friend.” Gooch said, to him, that is what he thinks of when he thinks of veterans.
“We all owe him for his dedication of sacrifice,” Gooch said, asking Keeley to come forward and share his story for those in attendance.
Keeley was presented an award for being the 6,000-veteran honored by Freedom Fest, as well as a plague presented from Gooch personally to thank him for what he did and his service for his country.
“The veterans came back, and we went into hiding,” Keeley said. “We didn’t want to talk to people because the comments that would be made to us. For the longest time, I just held everything inside until I met a veteran at the vet center and he said he goes to the funerals of veterans to honor them. He said the saddest thing is the people that he would tell the story to about that person who had passed away never knew what they had done. He challenged me, he said, ‘you need to tell your parents, your family and share and tell what happened to you.’”
Keeley said he flew in the 101st airborne in combat assault in Vietnam. Over the year he was there, Keeley was shot down seven times, crushed twice and left for dead. Keeley said he used to tease everyone he would meet back on base who would tell him they thought he was dead by saying, “Somebody up there like me.” Little did he know then God had a plan for him.
Keeley shared a story about his time serving his country when he flew into a landing zone covered in elephant grass and the aircraft could not land. As they were hovering over the mountain, Keeley said the propeller got caught in the elephant grass and held them still. At the time, Keeley said the enemy was firing at them and they could not stay where they were. The aircraft missed landing and its rotor blade hit the ground. When that happens, Keeley said it kills everyone in it. But this time, when the blade hit the ground, it fell off and the aircraft rolled down the hill like a barrel and crushed him all the way to the bottom of the mountain where he landed under the aircraft.
When Keeley came to, he climbed out through the jungle and was able to get to the top of the hill and catch a ride on the next air craft coming in and return to base. Sitting in the dispensary with soldiers that were severely wounded, he couldn’t stand it and left and walked back to the base. Walking into the company his fellow solders told him they had already reported him dead.
“At that point, I had to write a letter to my parents telling them, ‘mom and dad, I am ok, don’t believe what you hear,’” Keeley said. “That is when I knew God had a plan for me… So, God has a plan.”

Nicholasville Tire and Service prides itself on quality work at a fair price in a timely manner By Anne Carmichael... read more