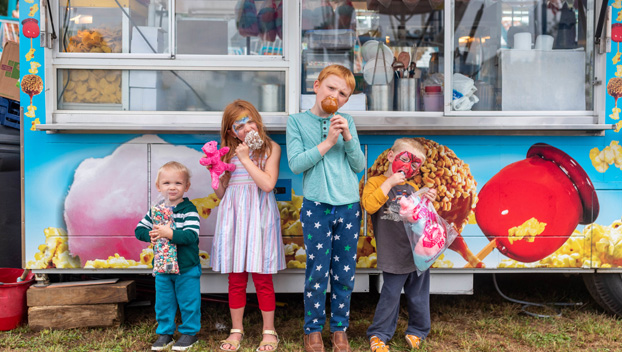 After being hosted at City-County Park the past three years, the Jessamine County Fall Festival will move back to its former home downtown surrounding the Jessamine County Courthouse this fall.
In recent years, the fall festival has been named Hope Over Jessamine, proceeds have benefited the Revive Lifehouse and activities have focused on faith and community.
This year, Ann Marie Nipp said the focus will be more on community with less faith involvement and proceeds will benefit the Jessamine County Homeless Shelter.
“The city county park has always been very good to us, but we feel too far away, we want to bring it back to the heart of the city,” Nipp said.
This year’s festival is scheduled for 11 a.m. to 7 p.m. Saturday, Sept. 28.
Nipp said although the festival may only be one day of fun, family activities for festival goers, in the future, she would like to see the festival increased to two or three days for the community to enjoy.
“With community support, we hope to increase to two or three days in the future,” Nipp said. “It is going to be a blast and different than in past. Several parking lots will be labeled, there will be maps and shuttles. It will be very similar to any other community festival.”
First and Walnut streets will be blocked off the day of the event. The festival will feature 100 to 150 vendors specializing in food, retail and photography. There will also be a silent auction, pony rides, petting zoo, inflatables and face and pumpkin painting.
“I had the idea to bring it back downtown,” Nipp said. “We want to be community based. We want people to be able to have easy access to it. We want local businesses to have prime exposure and we want to be able to drive traffic to our stores downtown as well.”
Nicholasville Mayor Pete Sutherland said he is excited to see the wholesome family event come to downtown this fall.
“They were very organized and had a great plan in mind when they came before the board,” Sutherland said. “Our police department is going to provide support and there will be several streets closed for safety. The Courthouse lawn will be in use also. We hope it goes well so we can make it an annual downtown event.”
Nipp said the fall festival this year is 100 percent supported by both the city and the county, and several vendors throughout the state have been contacting the fall festival committee to be involved, which should drive a lot of traffic into Jessamine County from out-of-towners.
“In the past, about 6,000 people (showed up to the fall festival),” Nipp said. “This year, we look forward to at least 10,000… This is a great opportunity for exposure for new and old businesses.”
For more information or to get involved, visit jessaminefallfestival.com or facebook.com/jessaminefallfestival.