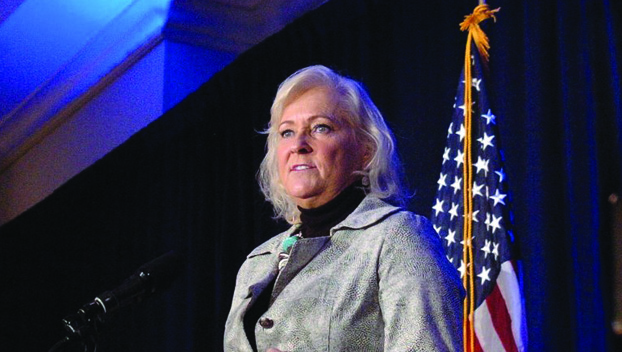 Jessamine County based All God’s Children, Inc. (AGC) was the honored recipient of the 2019 William Cooper Faith and Community in Action Award.
The award was presented to Executive Director Pam Smith at the recent 53rd Annual Kentucky Governor’s Prayer Breakfast at the Lexington Marriott Griffin Gate.
The prestigious William Cooper Faith and Community in Action Award was established in 2009 in honor of the Reverend William Jefferson Cooper, Sr., of Westport, Kentucky. Cooper, a man of faith and vision, founded the Kentucky Governor’s Prayer Breakfast. The recipient of this award embraces the heart of the Commonwealth, tirelessly working in service to others, leaving a lasting impact.
“We are so honored to have received this award, especially at a time when so much attention is being focused on the importance of building nurturing parenting skills during the first three years of a child’s life,” Smith said.
The award to All God’s Children, Inc. comes less than a month before the organization celebrates its 20th anniversary. AGC was originally founded by Smith as a home for abused and neglected pregnant/parenting teens and their babies. Today, because of a record-setting population of Kentucky children/teens needing help, AGC has evolved into four distinct programs that are designed to nurture children of all ages and invest in their families.
Their four programs now includes: a residential treatment home for pregnant and parenting teens and their babies, which is currently the largest of its kind in the state of Kentucky; a Therapeutic Foster Care Agency which locates, recruits, and trains foster parents throughout Central Kentucky that are eager to help care for the thousands of children in need of good, safe homes; a Pre-Independent Living Program for young mothers to take the next step into independence and have the opportunity to live in an apartment in downtown Nicholasville and gain essential independent living skills while also receiving on-going support and case management services; and an Early Childhood Center that is free for all AGC teen mother’s children to attend while they are furthering their education.
The non-profit agency, which was formed in 1996 and opened in 1999, is governed by a volunteer 14-person Board of Directors. The agency current has approximately 45 full and part-time employees.
For more information, call 859-881-5010 or visit www.kyagc.org.

Morgan elected to KMCA Board of Directors

From staff reports The Kentucky Magistrates and Commissioners Association, headquartered in Frankfort, Kentucky held its annual election of officers and... read more