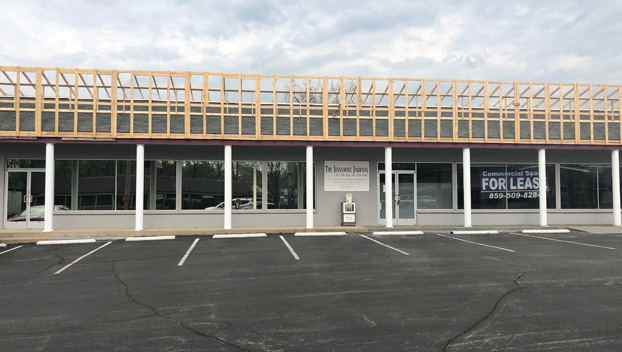 For 146 years, the Jessamine Journal has been the No. 1 source for news in Jessamine County — and that is not changing any time soon.
Motorists passing the current location at 507 N. Main St. have likely noticed the construction and large “For Lease” sign in the window of the northern part of the building, causing speculation as to what is happening to the local newspaper and if it would be relocating.
The Jessamine Journal will be there for years to come.
The building was sold to local businessman Kevin Mashni earlier this year because the location offered more space than the newspaper staff needs and a professional real estate developer is better suited to find quality tenants for the other half of the building at 509 N. Main. The Journal will continue to lease its current space.
“We are not going anywhere,” Jessamine Journal Editor Brittany Fuller said. “Since the industry has changed, we simply do not need the amount of space we previously had. Selling the building, and leasing back our side, has allowed us to stay put, downsize our wasted space and still offer great local news to the Jessamine County community.”
The Jessamine Journal was founded in 1873 by J.M. Parish of Mount Sterling, Ky., and changed ownership several times during its first century.
It has been managed by many distinguished Kentucky journalists, including C.W. Metcalf, Col. H.M. McCarty and Edgar E. Easterly Jr., an Associated Press editor and press secretary to Gov. A.B. “Happy” Chandler in the 1950s. Easterly bought the Journal and The Jessamine News-Week in 1956 and merged them the following year.
In 1990, his son sold the weekly to Republic Newspapers Inc. of Knoxville, Tenn., and in 2001, the newspaper was purchased by Advocate Communications, a subsidiary of Schurz Communications. Boone Newspapers, Inc. took ownership at the start of 2016.
“We are committed to remaining the best source of news, advertising and digital marketing services for Jessamine County and the surrounding area,” said publisher Michael Caldwell. “Much has changed in the nearly century and a half since the Journal was founded, but the importance of a community newspaper has never diminished. In fact, it is more important than ever. Our audience and reach are stronger than it has ever been, and we look forward to an exciting future as we continue to adapt and evolve to serve our readers and our advertisers.”
Anyone interested in leasing the vacant space at 509 N. Main St., can contact Mashni at (859) 509-8284.