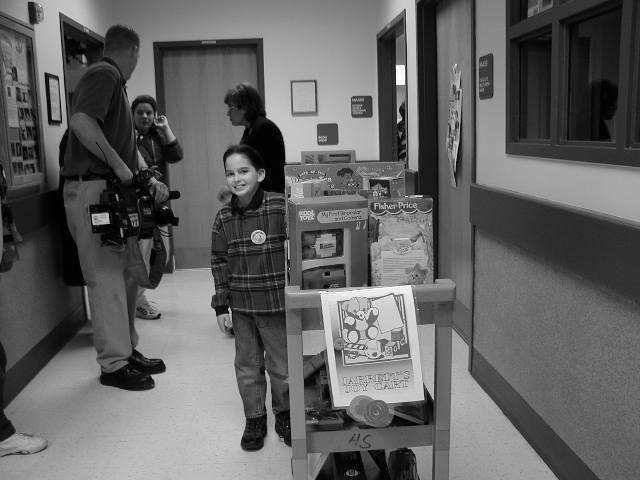 Nicholasville — Telling the story of how a young cancer patient from Central Kentucky inspired others with his humor, faith and determination while battling Ewing’s sarcoma, a rare bone cancer, Jarrett Mynear’s idea of collecting toys for other patients at Kentucky Children’s Hospital grew into a celebrated project.
The Boy Who Delivered Joy is a 20th anniversary edition of The Joy Cart published in 2002 by Fox 56 news anchor Marvin Bartlett. This project landed Mynear prestigious awards and national television appearances. Unfortunately, Mynear died just six months after that first book was released, at age 12 – but his Joy Cart only grew stronger.
The Boy Who Delivered Joy details how Jarrett’s Joy Cart became his legacy. New chapters deal with Mynear’s final wishes, his remarkable funeral, and how he is linked to the University of Kentucky’s most successful philanthropic event, DanceBlue. The annual 24-hour dance marathon has raised more than 14 million dollars for cancer research and to support the Kentucky Children’s hospital pediatric cancer clinic.
The new expanded book also tells the stories of other people who have been inspired to start volunteer projects of their own after crossing paths with Mynear and his “Joy Cart.” Readers may be surprised to know that Jarrett’s Joy Cart still rolls 17 years after his death on a weekly basis at hospitals in Lexington, Kentucky, Louisville, and Seattle and shows no signs of slowing down.
The Boy Who Delivered Joy was released March 25 and is available now through Amazon and Barnes and Noble. It is also available as an ebook for Kindle, Nook, Apple Books and Google Play Books. The book is also available on store shelves at Joseph-Beth Booksellers in Lexington and Carmichael’s Bookstore in Louisville.