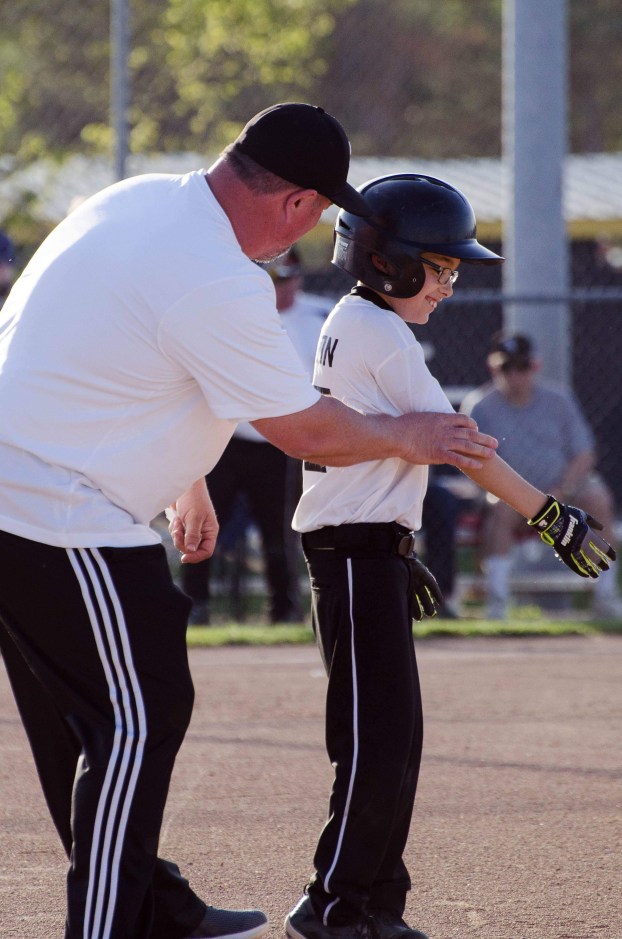 By Anne Carmichael
For The Jessamine Journal
Born without a thumb and with a spinal deformity, Jessamine County youth Gunner Johnson doesn’t let his obstacles in life keep him from doing what he loves — playing baseball.

“Gunner Johnson came to the Jessamine County Youth League last year as a nine year old with disabilities. He was born without a thumb and a spinal deformity which has left one side of his body smaller and weaker than the other. This hasn’t deterred Gunner in the least,” Jessamine County Youth Baseball President Jason Cissell said.
Gunner is now ten years old, but his mother, Rachel Black, remembers the day he was born like it was yesterday.
“The concern on all the doctors and nurse’s faces was very overwhelming,” Black said. “He wasn’t your ten fingers/ten toes baby, but when they came in and asked if they could do MRI’s and x-rays, my heart started racing. I thought, ‘Oh no, there’s more,’ and there was. He is missing four ribs. His arm is a full hand shorter on one side (and) his heart and lungs are smaller on one side.”
This spinal anomaly called Klippel Feil Sequence is a congenital condition which occurs at three to eight week’s gestation resulting in two or more fused cervical segments. The condition only occurs in one of 40,000 births.
“I’ve always told Gunner that God wouldn’t have made him special if He didn’t think he could handle it. He’s determined. If something is difficult for him, he just tries that much harder,” Black said.
Maternal grandfather, Tim Johnson, received a call from his daughter when Gunner was six-years-old.
“She said her son had been told yet again that he couldn’t do something,” Tim said. “He wanted to play baseball with his friends, but the regular equipment didn’t work. The glove kept falling off because he didn’t have a thumb. So, I went to Hibbett Sports and asked if they had anything that would allow him to play.”
It just so happened that Hibbett’s District Manager, James Pilson, was in the store that day and set about to find a solution that would work to allow Gunner to play the All-American past-time baseball, and fulfill his dream. Pilson called Rawlings, a manufacturer of baseball equipment since 1887.
Sarah Sharp, Hibbett Sport’s vice president of marketing said, “It was a team effort. Hibbett Sports reached out to our partners at Rawlings and shared photos of Gunner’s hand (front and back) and wrapped around a ball. We sent them a drawing of his hand with measurements of each individual finger’s length and width and the space between to show the spread. This not only gave the designer the hand size, but the shape of the palm, finger stall dimensions and hand stretch. We also provided measurements of the wrist strap to ensure stabilization of the hand so he could catch and secure the ball.”
Black said Hibbett Sports is now a part of their family and they have changed Gunner’s life and made his dream come true.
“It goes back to our core principle,” Pilson said. “We’re a service industry. We’re here to serve people. To be able to give a kid a chance to play baseball touches your heart. As his mom said, ‘we’re a part of their family now.’”
Gunner returns to Shriner’s Hospital in Lexington every few months for MRI’s, x-rays and follow-ups to monitor his lung capacity and heart function – but Hibbett Sports also continues to stay in touch with his growth as a baseball player. They recently had a new, larger glove made for him and have helped find a bat that was the lightest weight available. He was also given a $250 Hibbett’s gift certificate so he could purchase anything he wanted in the store.
Annette Deskins of Hibbett Sports told Gunner, “Don’t let anyone tell you that you can’t do something. Remember, you can do anything you set your mind to, because there’s always people out here in the world who are willing to help you achieve your dream.”
Physical obstacles aside, and with a team effort from those around him, Gunner has set out with the determination to be whatever he wants to be in life — baseball player included.

The spirit to serve: NPD has annual awards dinner