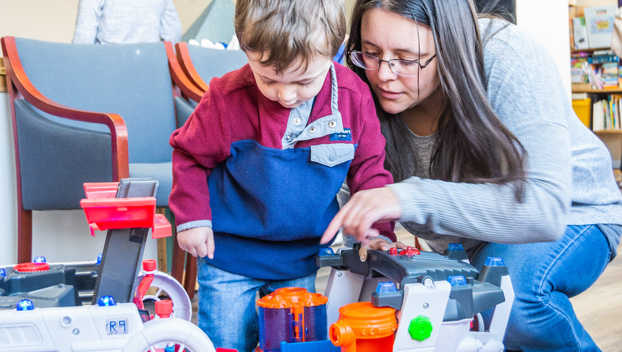 The Family Center in downtown Wilmore has completed renovations and is celebrating its grand reopening on from 10 a.m. to 2 p.m. April 13 at the Wilmore Businesses Spring Open House. Director Tara Hall said on that day, the Family Center will be showcasing the community many of the events and groups that meet there throughout the year.
“Inside the Family Center, we’re really going to have a true open house,” Hall said. “We run so many things here that it’s hard for people to know what we do. We’re going to have the play area open, but through here and all the other rooms, we are going to have about 12 different booths set up that will have whatever activities we do with some hands-on things you can experience and grab some materials about. (For) anybody who wants to know what we do at the family center, this is the day to come.”
Located at 334 E Main St in Wilmore, The Family Center hosts activities for all ages and all families. Hall said there are many events for children and even adult groups that meet and use the space regularly.
“A lot of people know that we do things for kids and have popular STEM Saturday events,” Hall said. “We have kids and adult art, and we even have a senior citizens exercise group that meets here. We cover the cradle to the grave in a family context.”
Hall said events begin when people in the community come to her and express interest in using the space.
“It’s all about what people want to offer to their community,” Hall said. “We even let groups keep their things here too. They get a little spot on our shelf. Instead of just being a place that people rent, we say people find a home here.”
The Family Center began three years ago, and Hall said she has seen individuals travel from as far away as Winchester to participate in the center’s events.
“We feel like we’re really putting something together here with the Family Center,” Hall said. “We’re excited to be a part of what we think is a downtown revitalization in Wilmore.”
Hall said the main focus of the renovations was upgrading the restroom facilities and making a large space in the back usable.
“The bathrooms are now fully wheelchair accessible and include diaper changing tables,” Hall said. “The old bathrooms were upstairs which made it inaccessible for wheelchairs.”
When Hall first entered the building three years ago, the only space that was usable was in the front, but she said there was a large space in the back of the building that used to be a garage. Hall saw the space and had a vision.
“I knew this was possible,” Hall said. “When I walked in for the first time after the renovations were completed on March 4, it was like the fulfillment of a vision. When everybody thought I was a little crazy for being here, I knew the potential. There was a certain kind of fulfilling satisfaction and gratefulness.”
Hall said she hopes the new multipurpose space will help generate some income for the Family Center because they don’t have any major donors.
“People can do birthday parties for as little as $50,” Hall said. “Our first party had about 20 kids and adults. We could probably do 30.”
With the renovations, Hall said each room now has its own access to the restrooms and separate entrances from the outside increasing privacy and allowing for multiple events at the same time.
The $9,600 needed for the renovations was fundraised by the Family Center and work was carried out by Eckman Properties who owns the building.
“My vision would not have been realized had it not been for the community and the landlord,” Hall said. “The landlord feels like we’re a good investment, and I’m glad.”