The spirit to serve: NPD has annual awards dinner 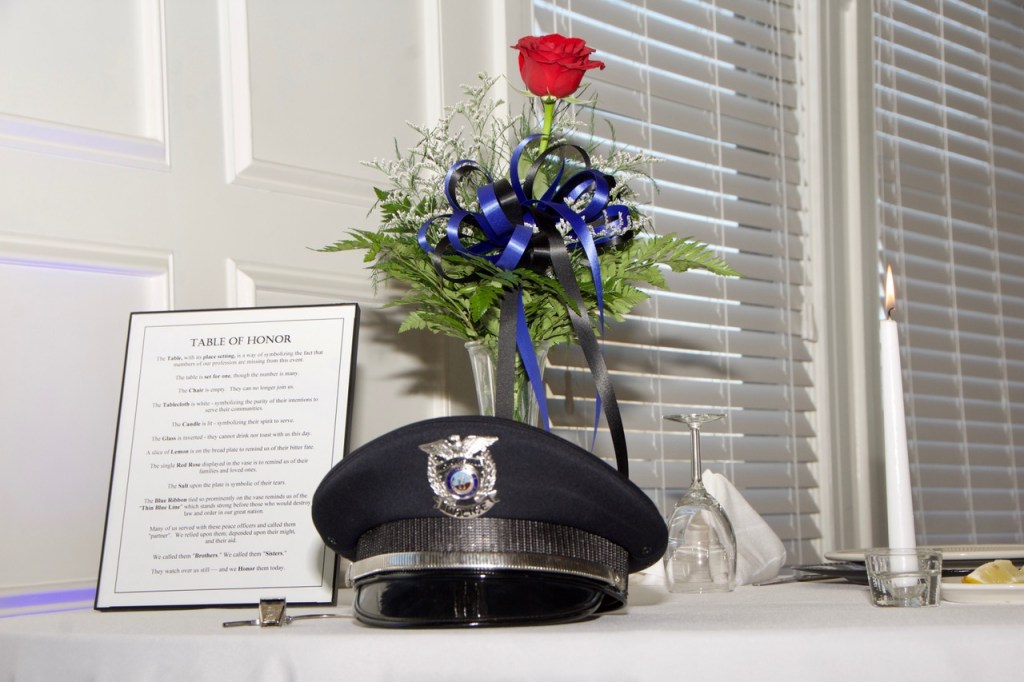 By Anne Carmicheal
For The Jessamine Journal

Last Saturday, Chief of Police Todd Justice welcomed officers of the Nicholasville Police Department to the Annual Awards Dinner at the Champion Trace Country Club to thank and honor them for their continued service to the Nicholasville community.
“Typically, we have an awards luncheon during the workday,” Srgt. Kevin Grimes said. “But, we have such great officers who really go the extra mile for the community, we decided we wanted to go the extra mile and do something a little more special to honor them.”
Grimes said when NPD officers were told the event would be a suit and tie affair with no uniforms, they weren’t sure how to react.
“They live in their uniforms,” Grimes said. “So, we felt like making this more of a semi-formal event would make it even more special. Seeing everyone all dressed up with their significant others tonight, I know we made the right choice.”
Sponsors for the event were: Keene Dining, Keene Trace Golf Club, L& W Emergency Equipment, Sky Unlimited, Burchfield & Thomas, Tranter & Tranter, Citizens Commerce Bank, Jonah Mitchell Realty, Signs Plus and In the Moments Photography.
As attendees entered the Keene Run Clubhouse, their eyes were immediately drawn to a table for one beside the entrance. The table was appointed with a single candle, a single rose and a place setting with a spoonful of salt on the white plate. A police officer’s hat and whistle were lying on the table, as though waiting for the return of their owner. A pale blue light was cast upon the solitary area. Upon closer inspection, attendees saw a frame that explained the significance of each item on the table. Designated as The Fallen Officer’s Table, this table was reserved in memory of all officers who had lost their lives in the line of duty.
Following a buffet dinner, Commissioner Betty Black welcomed the attendees and thanked everyone for their service. Brian Fields brought the significance of the table to the attention of those gathered at the event.
“In 2018, two Nicholasville police officers lost their lives while on duty,” Fields said. “Officer Burke Jevon Rhoads was killed in a car accident while on his way to police training. Officer William Paul Ketron was shot and killed by a suspect while investigating a previous shooting. Tonight, we honor these men and their families. They will always be remembered and sorely missed on this night of celebration.”
Fields said the empty chair at the table-for-one symbolizes the fallen officers who will not be celebrating with his fellow officers that evening.
“The white tablecloth represents the purity of intentions with which the officers faced each day of their service, and the single white candle (represents) their spirit to serve,” Fields said.
Fields went on to explain the crystal goblet is placed upside down because the officer could no longer toast his fellow officers who will be receiving awards for their service.
“A lemon slice on the bread plate is a reminder of their bitter fate,” Fields said. “A single rose in a bud vase encircled with a blue ribbon represents the ‘Thin Blue Line’ and expresses our sympathies and love from the department and the community for the families and loved ones who have given the ultimate sacrifice. Finally, the spoonful of salt on the otherwise empty plate symbolizes the salty tears shed by all for the fallen officers.”