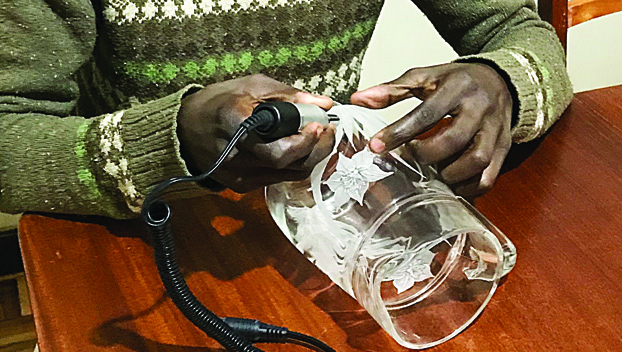 With the help of local resident Wesley Village artist Bill Tippie, Allan Limbe Ochieng has made Kentucky daffodils bloom in Africa.
Inspired by the daffodils on the Montrose Farm in Fayette County, a local missionary physician Dr. Ida Slusher whose mother lives at Wesley Village, hired Tippie to sketch the flower for Ochieng to etch on glassware which was later to be given to the farm’s owner, Lucy McKinstry.
Slusher travels to Kenya to work with a nurse practitioner where she has taken care of babies and children and even taught continuing education at local conferences for other missionaries in order to save them a trip back to the United States. Ochieng, Slusher said, etches each piece of glass with the use of a dental drill.
“He (Ochieng) lives in Nairobi and comes on a bus,” Slusher said. “She lets him know when people have things that they want to etch. He or she will buy glassware which is imported from different countries. You tell him what you want on it, and as long as it is something he can conceptualize, he can do anything you want on the glass.”
Slusher does not sell the items she comes home with, but rather gives them as gifts. Occasionally, she will donate an etched item from Africa to a silent auction.
“I did that for the Kentucky Nurses Association,” Slusher said. “The difficult part is getting it here. We brought it back in trunks we took loaded with stuff for mission work. We brought back three trunks of glassware. Thankfully none of it got broken.”
Tippie said what most don’t realize is every piece of glassware Ochieng etches is a work of art.
“They are not reproduced,” Tippie said. “He could not possibly do two exact ones, because he free hands them. They are not transferred onto the glass and then etched. He etches them as he holds the raw piece of glass in his hand.”
Slusher said she has not seen Ochieng etch a piece from start to finish. Normally preordering what she plans to have made, Slusher said her most recent order was completed in two weeks and contained 20 items.
“It is typically one to two days for a piece,” Slusher said. “This is his living. How they price things is to be comparable with the market over there.”
Tippie said the process of etching the daffodils started when Slusher came to visit her mother at Wesley Village.
“They always came by the craft room and I’d be in there working,” Tippie said. “She stopped by and introduced herself and asked if I could do a sketch of daffodils because she had an artist in Kenya who could not fathom what a daffodil looks like because they don’t grow over there.”
Tippie did, and the next thing he knew Slusher was back from Kenya with his daffodil sketch etched into a piece of glass.
“He is such an amazing artist,” Tippie said. “I can only aspire to be as good as he is.”