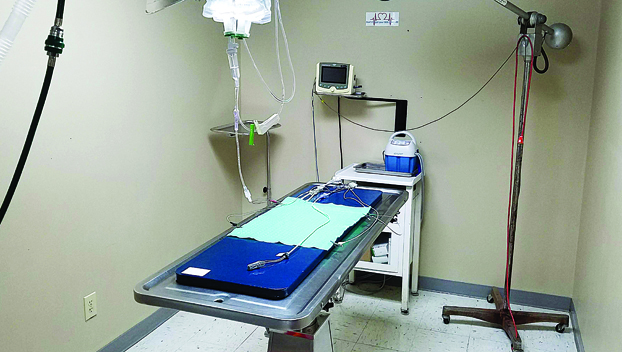 The Animal Hospital of Nicholasville celebrated its 20th anniversary Monday.
Dr. Dan Bowling has been there since the beginning and said he and Dr. Stacey Burdick had been working at the Jessamine Veterinary Clinic on Main Street but decided to branch out on their own and open their own clinic.
“This building was a year old when we purchased it,” Bowling said. “Dr. Burdick and I came over here on April Fool’s day in 1999.”
Bowling and Burdick, along with Dr. Julie Fox and Dr. Erin Keiser, together make up the staff at the animal hospital.
“It is a fun place to work,” Bowling said. “We enjoy it here. It’s like a big family.”
Because he sees so many animals in his work, Bowling said he can spot a good dog when he sees one.
“I see so many and I appreciate the relationship between the animal and owner,” Bowling said. “I enjoy learning about the owner by seeing a positive piece in their life. If you have a good dog that loves you, there is a good side to you. That is the good side I get to meet.”
Bowling grew up on a 100-acre cow farm in Madison County. His father was a family practitioner and also owned horses, dogs and cats. Bowling said veterinary work was a good fit for him.
“I have been in charge of taking care of all animals since the age of ten,” Bowling said. “I always enjoyed that. I now have about 90 acres in Jessamine County with a couple of steers, a few horses, dogs and cats.”
Bowling graduated from Auburn University’s veterinary school in 1985 and has been working in Jessamine County since then. He has also been working with his alma mater’s preceptorship program for over 20 years.
“You get to learn a lot from the students that come through,” Bowling said. “They are up on their information.”
But Bowling said working with the animal hospital exposes the students to the real world of veterinary work.
“The students have a chance to see what normal experiences are like compared to a teaching hospital,” Bowling said. “There, you’re not getting the normal, but the weird experiences.”
Bowling said about 80 percent of the animals he sees are dogs, 19 percent are cats and the last one percent contains everything else.
“Chimpanzees take the cake as the most interesting,” Bowling said. “I will occasionally look at some goats or guinea pigs, and we have had one snake come through.”
The animal hospital provides many different services to pet owners including orthopedics, soft tissue surgery, spades, neuters, and butt and abdominal surgery.
Bowling said he and his colleagues have also been taking care of the Nicholasville Police Department’s canines for many years.
The hospital is certified by the American Animal Hospital Association, and Bowling said the AAHA certification has been a good thing.
“We know our surgeries are safer,” Bowling said. “It affects how we do things. They have helped us up our game. It is an elite group to be in.”
But the hospital does not deal with animal emergencies. Bowling said they refer clients to a Lexington clinic. The animal hospital also has a program for trapping, spaying and releasing cats.
“Due to the large number of feral cats in Jessamine County, we started the TNR program in 2007,” Bowling said. “We have done three to four thousand cats since then. It has been a positive experience. It reduces the number of cats coming into the shelter, sick cats in other shelters and increased the live adoption rate for cats in shelters. It makes a stable, healthier population.”
Bowling said the animal hospital has been a veterinary partner with the Jessamine County Animal Shelter. The hospital also sponsors two dogs and two cats a month for adoption at the shelter. Bowling said the shelter staff will pick out the pets and the animal hospital will pay forward the fees for adoption.
“If people come looking for an animal and happen to pick that one, we can tell them the fees have been paid for,” Bowling said.
The animal hospital also had a boarding kennel attached for families needing to leave their pets for extended periods of time.
For more information call 859-887-8086.

By Glenn McGlothlin glenn.mcglothlin@gmail.com The Family Center in downtown Wilmore has completed renovations and is celebrating its grand reopening on... read more