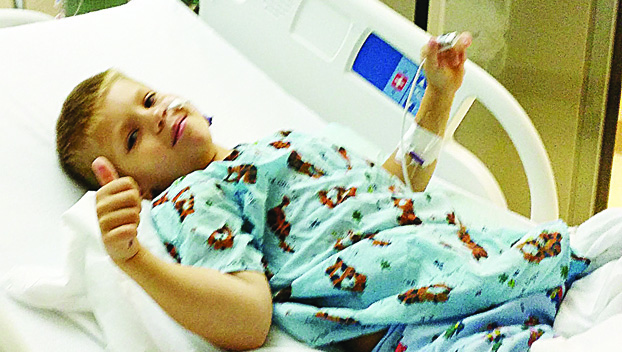 After being diagnosed almost three years ago with Ulcerative Colitis, Jessamine County fifth-grader Alex Caudill doesn’t let the disease hold him back from doing what he loves most — baseball, camping, kayaking and fishing.
“He loves arts and crafts,” Alex’s mother Debra Caudill said. “(But he’s) pretty much an all-around outdoor kind of boy.”
Debra said Alex showed numerous symptoms before he was diagnosed in the summer of 2016, but the main warning sign was a bloody stool she figured her son got from straining too hard.
“I didn’t think much of it until it got much worse,” Debra said. “I took Alex to his doctor who did blood work and sent us home. The very next day I got several voicemails while at work saying he had already been admitted to the hospital and for us to get him there ASAP.”
Alex’s blood levels were so low he had to have a blood transfusion. He was diagnosed two days before his eighth birthday and had to spend almost a week in the children’s hospital at the University of Kentucky.
“The doctor was surprised he could even stand,” Debra said. “They ran test after test before they started to consider cancer, which, of course, was our biggest fear.”
Since his diagnosis, the family has tried to not let Alex’s condition affect their everyday life. What is important to Debra is both of her sons get the same opportunities and attention, even though juggling that task may prove difficult at times.
“We do have more trips to the doctor’s office,” Debra said. “We know where all bathrooms are when we go somewhere. We keep a change of clothes and wipes with us everywhere we go. We’ve had to cancel plans because of Alex having extreme stomach pain or allow extra travel time for unexpected stops.”
While Alex gets upset sometimes, for the most part, Debra said he is accepting of his condition. Even though at times he has asked his mother, “why me,” Debra is quick to reassure him God only gives his toughest battles to his strongest soldiers, she said.
“We also remind him that even though it’s not something we wanted to hear, it most definitely wasn’t the worst news we could have received,” Debra said.
Currently, there is no cure for UC. Alex will have frequent doctor visits, hospitalizations, colonoscopies and medications throughout his life to help with his disease.
In eight to 10 years, Alex will be required to have a colonoscopy once a year to check for colon cancer.
“So, while other teenagers are getting their license and looking at colleges, Alex will be adding appointments for a colonoscopy to an already busy schedule,” Debra said.
Most people do not know Alex battles UC daily. However, Debra said there have been times kids have laughed and put her son in tears when they have overheard him saying he did not make it to the bathroom in time.
Although Debra said it is never OK for bullying to happen, she believes a lot of it comes from a lack of understanding.
“It’s more than a pooping disease,” Debra said. “It takes an emotional and physical toll on the body. It affects your joints, eyes, ability to think clearly and relationships with people.”
Alex said he wants to lead a normal life despite his diagnosis.
“Living with UC isn’t easy, but my life is just like everyone else’s except I have to deal with a little more than some people,” he said.
Debra remains hopeful for a cure, but even if not, she said she hopes her son will live a normal life and his diagnosis will not interfere with his dreams.
“He wants to be a zoologist he loves studying animals,” Debra said.
Alex is enrolled at Nicholasville Elementary School. Alex’s teacher, Lindsey Helton, said he is a wonderful student.
“He is always looking for ways to help others,” Helton said. “Whether it be holding a door for someone or helping someone up who has fallen. He is an extremely hard worker and is fun to teach since he gets excited about what he is learning.”
DEbra would like to find or start a support group in Jessamine County for kids dealing with UC or Crohn’s Disease.
“So the kids know they’re not alone and they can have someone to talk to about what they’re going through and dealing with,” Debra said. “I think it would help them a lot to have someone to talk to closer to their age.”