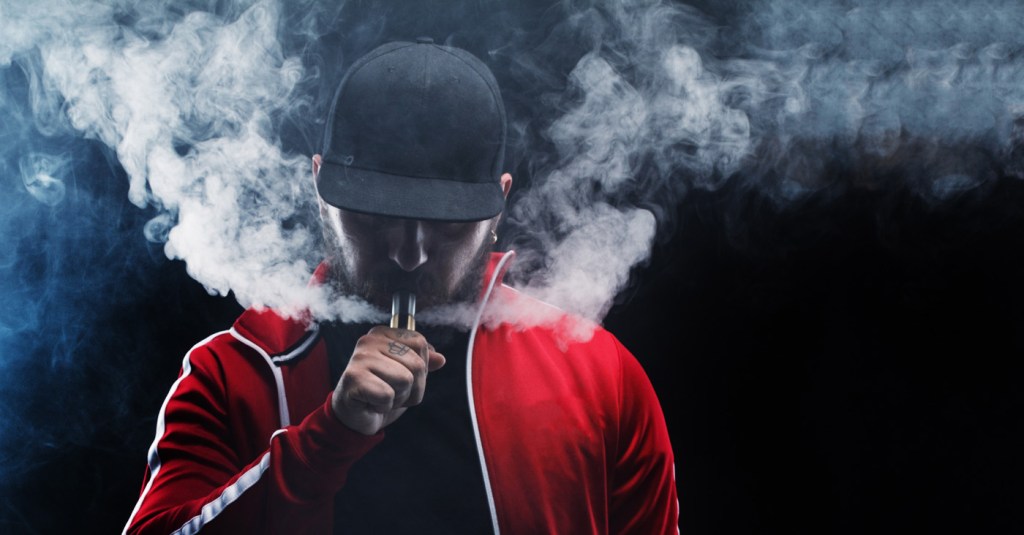 What is portable, looks like a flash drive and comes in a variety of different flavors? Here is a hint: It contains a high concentration of nicotine but it’s not your parent’s cigarettes.
New studies suggest one in four high school students now use some form of tobacco, with a form of e-cigarette named JUUL showing dramatic increases in use among teens and young adults.

What is JUUL?
Designed to imitate the experiences of a real cigarette, the difference between JUUL and other e-cigarette products on the market is there are no settings. Sensing when the user takes a puff off the mouthpiece, the device heats up to vaporize the liquid inside and prevents overheating or combustion when compared to its counterpart e-cigarette brands such as Joyetech, Eleaf, Wismec, UD, SMOK, Sigelei, Uwell, UD, Hellvape, Suorin, VOOPOO and Vaporesso.
JUUL pods mimic the appearance of computer flash drives and come in a variety of flavors including cool mint, creme brulee and fruit medley. Each pod contains the same amount of nicotine as one pack of cigarettes. JUUL pods also contain additives such as glycerol, propylene glycol, benzoic acid and other flavorants.
To start, a JUUL device will cost the consumers $35 to $55. A package of four JUUL pods costs $15.99. When broken down that is only $4 per pod, making the JUUL pod cheaper than some leading brands of regular cigarette products on the market.

By the Numbers
A recent report from The Center for Disease Control shows 27.1 percent of high school students, and 7.2 percent of middle school students, used a form of tobacco product in 2018, with the latest report showing an increase in youth e-cigarette use.
With tobacco known as the leading cause of preventable disease in the United States, nearly all tobacco product use is shown to start during youth and young adulthood. In 2017-2018, tobacco use among high schoolers increased by 38.3 percent from 19.6 to 27.1 percent previously. E-cigarette use increased 77.8 percent among high school students, compared to 11.7 to 20.8 percent during the previous study.
In fact, the number one leading cause of cancer-related deaths in Kentucky are lung and bronchus, landing third in the state for new cancer cases.
In Jessamine County alone, 1,010 new cases of cancer were reported between 2011 and 2015 per 100,000 people. Of those cases, 187.7 were reportedly lung and bronchus cases. Currently, only 42 percent of Kentucky schools are tobacco free.

Impacting youth and families
Kentucky has been making strides to change its current laws to restrict tobacco use for teens and young adults.
House Bill 11 passed last week with a vote of 85-11 which would create a new section to KRS Chapter 438 to prohibit the use of tobacco products by students, school personnel, visitors in school, school vehicles, properties or activities requiring smoke-free signage for the 2020-2021 school year.
Senate Bill 218 would establish an anonymous tobacco free hotline for students. This would allow students to report the distribution of tobacco products and e-cigarettes at school.
Senate Bill 249 is also currently being looked at in Frankfort and would restrict the sale of tobacco and vapor products to anyone under the age of 21. Both HB 11 and SB 218 are required to have final approval before March 28.
Missy Woolums, a parent of a high school student in Jessamine County, said she feels e-cigarette/JUUL use is dangerous to the youth today.
“I think it tricks kids into thinking it’s not as bad as regular cigarettes,” Woolums said. “I think kids think it’s ‘cool’ to smoke and they may not believe e-cigarettes are less dangerous. It should definitely be talked about and addressed. I think schools should be tobacco free.”
Woolums is aware that one JUUL pod contains as much nicotine as one pack of cigarettes.
However, for Kim Burdine, another Jessamine County parent, that was new news. Burden said she believes peer pressure is what draws the younger generation in.
“I believe that people think e-cigarettes are not as harmful as smoking, so this may make it more appealing to those individuals,” Burdine said. “I feel we do not know at this point how harmful e-cigarettes are. I think we will know more when more research is done.”
Burdine also feels that, although discouraging youth to smoke at school is a good thing, they should also be deterred from smoking other places as well.
“There is a lot that we do not know about e-cigarettes and their effect,” Burdine said.
Jessamine County Health Department Director Randy Gooch said he feels parents are unaware of the new devices and the harmful effects or severity of addiction which could come from using such products.
“I think teens are miseducated by misleading advertisements that say these devices are less harmful and can help with nicotine addiction, which isn’t true,” Gooch said. “Plus, teens feel that they are invincible and do not equate long term consequences with their current use.”
Although not all studies have been completed, Gooch said there are known cases of popcorn lung, higher risk of inhaling bacteria from the mouthpiece and higher risk of addiction among youth. However, long term consequences are still being studied.
Supt. Matt Moore said Jessamine County Schools are currently working on educating students, parents and staff on the dangers of e-cigarette/JUUL use. East and West Jessamine High School recently implemented a training day which included displays and devices to show staff what to look out for throughout the school day.
“I do believe that teenagers are being targeted by companies producing the vaping devices,” Moore said. “There are still a large number of students and parents who are not aware that JUUL and other vaping devices possess harmful chemicals.  It is not a safe alternative to smoking. We do not have district-level data on this topic, but students and staff have confirmed that they have seen a significant increase in the use.”
The Jessamine Journal interviewed two Jessamine County School students about the increase of e-cigarette/JUUL use in the county and have allowed them to remain anonymous to avoid any kind of stigma.
A Jessamine County sophomore says the number of students who vape and do not know the consequences is a real problem. He also said he believes the statistic is actually higher than one in four students who currently use the product.
“I think we should definitely educate students more on what vaping does, but I don’t think they should make it preachy because I think the more you tell teenagers not to do something the more they’re going to want to do it,” he said.
On the other hand, a local Jessamine County senior in the district said she feels the one in four statistic is a little too high and she only knows 20 peers who use tobacco products.
“(Kids are doing it) because it is the ‘trendy’ and ‘cool’ thing to do,” she said. “I’ve seen kids doing it in class, so yes, it is a pretty big problem.”
Moore said there are repercussions if a student is caught in possession of a tobacco product or smoking in class. The first offense for possession of a vaping device is two days of in-school suspension. The second offense is two days of off-campus suspension and random searches for the remainder of the school year. For the third offense, students are suspended and required to enroll in an intervention program for consideration for a reduction in suspension days.
“To date, a very small number of students have been disciplined for two vaping offenses,” Moore said.
For the local senior, she thinks the issue effects junior high students as well and was not aware that one JUUL pod contained as much nicotine as one pack of cigarettes.
“I knew it was a lot, but I didn’t know it was that much,” she said. “Nobody seems to be trying to hide it and they think it is not harmful. I am not sure I would consider it an emergency, but it is an issue.”

In store
Anne Cautier owns the Big Blue Vapor Shop in Nicholasville and said since she opened up shop in September of 2013 she has seen an increase in sales from all demographics who are coming in to purchase vaping products.
“People didn’t know what it was when we first opened, now you see more vapors than smokers,” Cautier said. “We have several brands… but the most popular brand is Lemon Twist which comes in a variety of different flavors.”
When asked if vaping was receiving a bad reputation, Cautier said the FDA came out six months ago and said vaping was better than smoking. In fact, Cautier said a British medical journal recently reported there was no statistics they could find against it, although long term studies have not been completed yet.
“Cigarettes have 4,000 to 5,000 chemicals, most have never ben tested,” Cautier said. “E-cigarette juice has four ingredients.”
Although JUUL pods have a ridiculous amount of nicotine, she said.
“Even if you were a four pack a day smoker, you probably wouldn’t get (JUUL),” Cautier said. “I never sell it… My daughter was telling me how these kids had JUUL – in sixth, seventh and eighth- grade. It is too bad because all these kids are wanting to do is puff. I am not going to sell to them. I told her, if you know of any parents what they ought to do is get them salt nicotine and buy 0 nicotine… (But) we don’t sale to kids.”
In fact, with the new state IDs, Cautier said it is easier than ever to check a customer’s date of birth.
“There is red at the top of the ID that tells you if the person is under 21 or 18,” Cautier said.
Whether you are considered under age or an adult, Cautier’s theory for why people smoke is because it forces the individual to take a deep breath.
“My theory is your body automatically breaths for you,” Cautier said. “I think it has a lot to do with that is the only time you take a deep breath. Kids get stressed too.”

Changes on the horizon
Kentucky has made strides to change the laws to restrict tobacco use for teens and young adults. Gooch said policies such as House Bill 11 and Senate Bill 249 could dramatically impact the rates of individual behavioral education and treatment.
“The Jessamine County Health Department is working with the superintendent’s office to focus on parent and student education,” Gooch said. “The Master Settlement Agreement restricted flavors on traditional tobacco products because they were appealing to youth. E-cigs, without regulation, are able to put out flavors like cotton candy, fruity flavors and others that would appeal specifically to youth. In addition, the newest trend of vaping devices looks like flash drives and key fobs, therefore, making them trendy and cool – again appealing to youth.”
With only a few days left in the legislative session, Gooch said hope is dwindling that either bill will become law.
“Unfortunately, Kentucky’s tobacco heritage, Big Tobacco Money and freedom of choice has usually been a huge barrier to passing significant tobacco legislation that would have a positive impact on the health of Kentucky,” Gooch said.
Still, the Jessamine County Health Department is moving forward and pursuing change. The department recently attended the Stanford University Tobacco Prevention Toolkit Training in order to implement educational programs at both EJHS and WJHS.
“These lessons will focus completely on the nuts and bolts of vaping/juuling/e-cigs, etc. and provide prevention info,” Gooch said. “The effective prevention techniques from this toolkit and training will enhance education about the dangers of these products before the students experiment or are exposed to them.  So, when they are offered these products, they have an understanding of the addictive and deadly nature of usage.  This knowledge is empowering to youth which will hopefully in turn reduce the incidence rates.