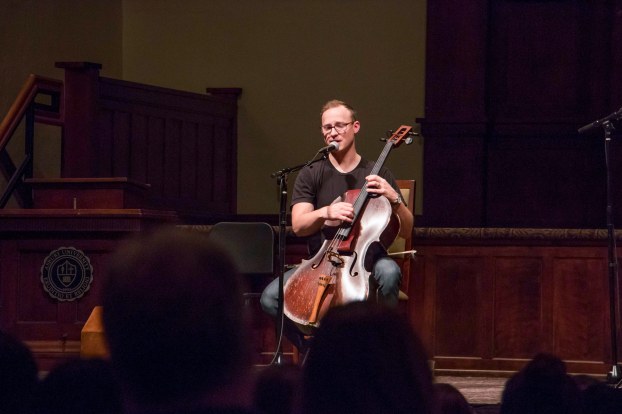 Bow met strings, interrupting the silent anticipation in Asbury University’s Hughes Auditorium Friday as cellist Ben Sollee began his inventive and fascinating genre-spanning set.
The Kentucky-born-and-bred bluegrass musician played on campus as part of Asbury’s Artist Series, which brings a broad array of world-class artists to campus each year.
Sollee, a cellist and singer-songwriter, brought with him a slew of songs ranging in genre from classical to bluegrass to R&B. Drummer Jordan Ellis supported Sollee throughout the imaginative Artist Series set.
For Dr. Jill Campbell, Artist Series committee chair and music professor, Artist Series events not only expose campus to new and different kinds of artists, but also encourage the community to take a pause from the busyness of life.
“Good music brings people together,” Campbell said. “I’m so excited tonight that we can do that here, regardless of what kind of day or week we had. We all get to set that aside and just take a deep breath.”
Sollee has been recognized nationally with appearances on NPR Music’s Tiny Desk Concert Series, South by Southwest Music Festival and TEDx San Diego. He’s also famously toured the country several times using bikes and trains alone. His most recent work is an original score for “Ruth: The First Ever Dance Book,” a multimedia experience that combines writing, illustration, music, film and dance.
Sollee’s Artist Series performance centered on the art of storytelling. In between pieces, he would pause and share collections of stories from his personal life– stories of growing up and learning to play the cello in public school, quirky individuals he met on tour, a redheaded girl he moved to California for who later broke his heart and finally, a local artist who was diagnosed with ALS.
Sollee and Ellis were having so much fun jamming on the Hughes stage that they lost track of time, much to the delight of the highly engaged audience.
“Don’t feel the need to stay, we’ll just keep on playing,” Sollee joked as the crowd erupted in laughter and applause.
The evening came to a close with a fun, interactive segment wherein the audience parroted Sollee as he sang the lyrics of bluegrass tune “Blue Moon of Kentucky” by Bill Monroe.
“Thanks so much to everybody here at Asbury for hosting us,” Sollee said of his time on campus. “It’s been a treat to be here and I hope we get to come back soon.”
Sollee’s show marked the final Artist Series performance of the academic year. Earlier in the year, Asbury hosted organist David Briggs, photographer Byron Wolfe and singer Whit Whitaker.

From staff reports At this very moment, cars are being packed up and planes boarded as university students across the... read more