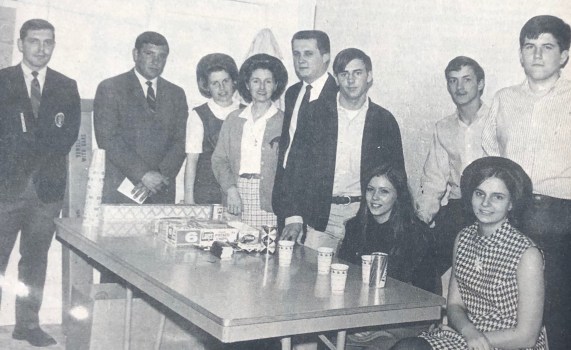 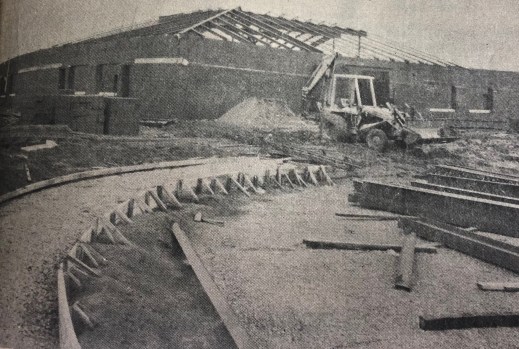 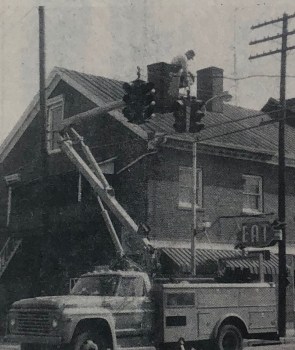 Cavern unearthed at new EJMS site. Construction workers working on a new road across the new East Jessamine Middle School property found what they thought was a small sinkhole adjacent to the parking lot. A few weeks later, a worker digging several yards up the road broke into another hole in the earth.
Homemade bomb found at station. A Main Street service station was closed for a couple of hours after a suspicious device wrapped in duct tape with a fuse sticking out was discovered in a window of the garage.
Legislators: Drop in gas tax would cripple road projects. Jessamine legislators Bob Damron, D-Nicholasville, and Tom Buford, R-Nicholasville, said a possible drop of 4 cents in the state’s gasoline tax would spell doom for many road projects.

SPORTS
Lincoln ends emotional season for Jaguars. The East Jessamine girl’s basketball team ended a dramatic and tragic season with a 58-40 loss to Lincoln County in the opening round of the 12th Region tournament in Somerset.
Colts win third 46th district title. The two regular meetings between East and West Jessamine came down to which team could make the last run. But, when the two teams hooked up in the 46th district tournament finals, the key sequence occurred in the second quarter. The Jaguars (20-1) couldn’t take advantage of West’s Jarrod Polson’s foul trouble and the Colts (23-8) strung out a seven-point lead while Polson was confined to the bench with three fouls.

City begins push for Main Street program. The board room of City Hall was filled with residents, merchants and professionals who were interested in improving Nicholasville’s Main Street in the area known as downtown. Ben Brown, president of Citizen’s Bank, said he plans to approach other bankers about working together to offer financing for downtown renewal.
Blast damages house in Orchard. The explosion caused by construction crews working less than 100 yards from George Freitas backyard last August, rocked Freitas’ two-story home in the subdivision having his foundation cracked in several places.
US 27 study completed: public meeting March 8. The city and county planning commissions will hold a joint work session to discuss the impact of the recently completed U.S. 27 Corridor Study on their comprehensive plans.

SPORTS
Commodores conquer Colts in tourney. The Colts were a mystified bunch after the Creekers, who didn’t shoot all that well themselves, held on for a 49-41 win.
WJ’s McGaughey 4th in state swim meet. West Jessamine’s Rebecca McGaughey captured fourth place in the girls’ 200-meter freestyle to lead the Colt’s swimming team in the State High School Swimming and Diving Championships last weekend at the University of Kentucky.

Desired characteristics of new superintendent set by board. Jessamine County School system is just a little closer to having a new superintendent these days after the board of education accepted a two-page summary of attributes. The two-page summary addresses personal characteristics, leadership characteristics, skills, expertise and professional orientation and experience.
Tom Calkins hired to direct city utilities. Thomas P. Calkins has been on the job for City of Nicholasville as utilities director since Feb. 1. The 34-year-old native of Kansas, Missouri, joins the city administration staff as a specialist in utilities operation and specifically electric, water and sanitary sewer.
NPC OK’s E. Brown townhouse zone. Forty home lots approved in Orchard Park; Kimberly R-1 buildup in future. An overflow audience of 40 turned out Monday evening at the Municipal Building here to observe and sometimes comment on the developer and homebuilder proposals before Nicholasville Planning Commission.
SPORTS
Jessamine County junior cage cheerleaders honored Sunday. Cheerleading, often overlooked for its contribution to sports programs, was given a lift. Appreciation day was observed for cheerleading squads in Jessamine County Junior Basketball League.
Colt JV’s stop Harrodsburg Bracken; Conclude at 16-1 mark. The Jessamine County High School junior varsity coach was checking the record books to see if there was ever a better won-loss record than 16-1. That is what his team finished this year after late-season wins over Harrodsburg and Bracken County.

Elementary principal Floyd Hall will retire; three persons named as new fall principals. Floyd Hall, principal of Nicholasville Elementary School for 13 years, will retire this fall. Hall’s retirement and the appointment of three men to principal positions in Jessamine County were announced at the last board of education meeting.
Patrolman injures back when cruiser is struck. Nicholasville Police Patrolman Tommy Broach was taken to St. Joseph’s Hospital Saturday for X-rays of a back injury he received when a police cruiser in which he rode as a passenger was struck.
Police charge three with a chain of Wilmore thefts, burglaries. Three juveniles have been charged with a long series of burglaries and thefts in the Wilmore area, Wilmore Police Chief Roger Swallows said Tuesday. Wilmore businesses, people and country stores have undergone a two-and-a-half-month ordeal of loss from crime attributed to three youth.