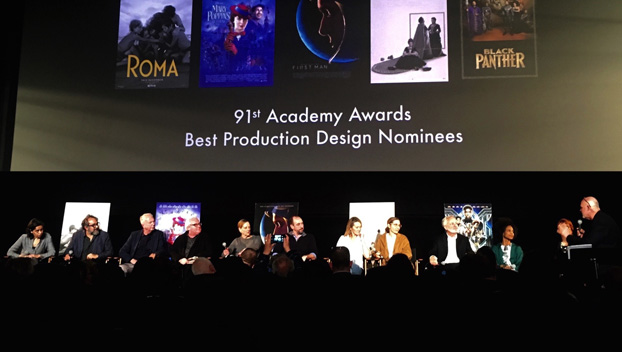 Hollywood was abuzz last month as actors, producers, writers and other industry heavyweights headed to the 91st Annual Academy Awards.
But before any Oscars were handed out, students from Asbury University’s Media Communication Department got to meet with several nominees thanks to a unique production design trip.
Dean of the School of Communication Arts Jim Owens, alumni and students were invited to attend the Art Directors Guild Oscar’s Panel. Panelists included production designers and set decorators from all five films nominated in this year’s Academy Awards’ Production Design category.
In addition to attending the workshop, Asbury students got a backstage tour of the Warner Brothers Studio. They also spent extended time speaking with several nominees one-on-one.
The workshop, entitled “Art of Production Design,” was hosted at the Egyptian Theatre in Los Angeles Feb. 23.
According to Owens, the event gave students unprecedented access to Oscar winners and nominees. He was especially appreciative of how the designers took time to answer questions, give advice and reach out to the Asbury students present.
“It was incredible to see Oscar nominees spending more than an hour talking with our students,” Owens said. “Experiences like this are career-changing for those exploring the field of film.”
Among the panelists were Production Designer of “Black Panther” Hannah Beachler and Set Decorator Jay Hart who won the category during Sunday night’s awards ceremony. Students were able to spend additional time with Hart, asking questions and posing for a photo doing the “Wakanda salute” from the film.
Anne Reinhiller said she took much away from the trip and highly recommends the experience to others in the media communication department. Most of all, Reinhiller found the nominees’ stories motivating and hopes to apply the lessons she learned to her own career and life.
“Each and every one of the nominees started out small or in a ‘small role,’” Reinhiller said. “They worked hard to get where they are. It was very encouraging to know that everyone does start somewhere. Don’t lose sight of who you are and where you want to go even if you aren’t in the role you want to be in.”
In addition to attending the panel, the group ate lunch with John DeCuir Jr., who served as the art director for “Ghost Busters.” Posters and props from some of DeCuir’s films can be found in Asbury’s Miller Center for Communication Arts.
Students also met with John Myhre and Gordon Sim who worked as production designer and set decorator on “Mary Poppins Returns.”
Jay Hart, Oscar winner for “Black Panther,” asked the Asbury students to do the “Wakanda salute” with him.
SB Stroh loved the opportunity to congregate with so many production design “legends” in one room.
“I learned a lot about what the industry is like and what it’s like to work within a crew as a production designer,” Stroh said. “We spoke about how to navigate a good relationship with a production designer and a director. We talked about how to keep going and be persistent in what you want to do with your creative life.”
Asbury has a long-standing relationship with the Art Director’s Guild. Last month, the Guild donated 27 historic film backdrops to Asbury, including backdrops featured in films with notable Hollywood stars Katherine Hepburn, Spencer Tracy, Frank Sinatra, Elizabeth Taylor and Jimmy Stewart. Backdrops from “Raintree County” and “Some Came Running,” films shot in Kentucky, were donated as well.
This is just one of several unique industry opportunities that Asbury students are able to partake in thanks to the University’s top-of-the-line media communication department. A few weeks prior to the Oscar weekend trip, media communication students visited Sundance Film Festival in Utah.

The following events have been announced at the Jessamine County Public Library, located at 600 S. Main St. March 7... read more