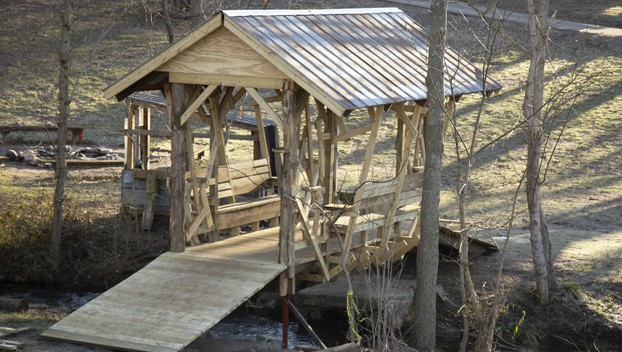 After being damaged by a storm last year, a new bridge was built this week on the AdventureServe Ministries Camp in Wilmore which will help groups spending time along the stream and children walking to and from school.
“People have been crossing here on foot since 1890 when the first Wilmore Holiness Camp Meeting was held,” AdventureServe Ministries’ Director Andy Bathje said. “In honor of this history, the roof structure was built with metal and wood from the former Scudder Cafeteria which once stood nearby.”
With a portion of $6,125 given by the 100 Women Who Care group, AdventureServe was able to purchase bridge materials. Bathje said the other portion of the funds donated was added to a $15,000 Kentucky Colonels grant for creating a large gathering space in the summer dormitory on site.
“The 100 Women Who Care group is a social and philanthropic group that gives quarterly to many great service agencies in our community,” Bathje said.
The bridge was designed and constructed by Kevin Burgess, whose father built the largest treehouse in America, located in Crossville, Tennessee. Also built to include benches, one of the bridge’s benches is dedicated in memory of Bathje’s father who passed away last November.
“My dad was a wonderful man,” Bathje said. “Good-natured, a heart for children (and) always willing to serve and (be) submissive to the Lord’s will. He was proud of my work in ministry and enjoyed the camp staff visiting from Wheaton, Illinois. This bench reflects his character, he loved conversation which the two opposing benches will foster, and he was a relational bridge-builder, introducing me to people of other cultures and perspectives.”
Bathje said he is overjoyed with the bridge and hopes it will encourage increased foot traffic in the town, as well as a bigger appreciation for the Wilmore Branch of Jessamine Creek which has few points of public access.
“I’m sure it will be photographed often while people gather there,” Bathje said. “It honors the Scudder Family who served so many people in the old cafeteria, the attendants of Wilmore Camp meetings and the Ichthus Music Festivals who have shaped the moral fabric of Wilmore. My sister texted me, ‘Dad would’ve loved sitting there chatting, reading or just watching others.’”
For more information on AdventureServe Ministries visit adventureserve.org or call 1-800-884-8483.

‘All dogs can learn new tricks’