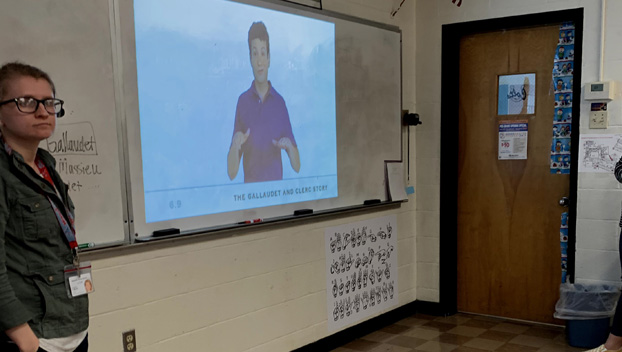 This year, West Jessamine High School starting offering a new class to students, American Sign Language. The program began last semester when Samantha Fowler became the first ASL teacher at the high school.
Fowler graduated from Eastern Kentucky University with a major in deaf studies and has enjoyed teaching students at WHJS over this past year.
“The community is so diverse, and I really look forward to shaping young lives,” Fowler said. “They’re very curious and want to learn about deaf culture and so I really appreciate their open-mindedness.”
Fowler is deaf herself and said that it has pushed her students to rely on sign language to communicate in class.
“They do struggle,” Fowler said. “They’re not used to not using their voice at all. It’s time for them to take their eyes and use them as their ears. It’s fun to watch their progress learning the language.”
Fowler teaches two sections of the class with a total of 42 students.
A junior at WJHS, Rose Branan, said she enjoys the class and it has introduced her to a new culture and community.
“It’s a class where you have to use your eyes as your ears, your face as quotations and your hands as your words,” Branan said. “It’s completely different than hearing classes especially with how quiet it is and how much everyone says.”
As a language, Fowler said ASL is versatile just like spoken languages. Most words have their own associated signals, while names and proper nouns are typically spelled out letter by letter.
The classroom helps teach the basics of communication, but Fowler said she has encouraged the students to seek experiences outside of school.
“I told the students that they have to find an immersion experience rather than just expecting to learn everything in the classroom,” Fowler said. “It’s not going to be enough. The classroom can be a stepping stone to more social opportunities such as silent coffee meetings or going to mall socials that happen.”
Exposing students to the new language has led some to even consider it as a career.
“A few of my students have expressed interest in being sign language interpreters or being more involved in the deaf community,” Fowler said.
Although the program is still in its first year, Fowler said most of her students are hopeful for a second year of ASL.
One of Fowler’s favorite parts of teaching is bringing in guests for the class. She said it helps the students to communicate with other people who are deaf besides their teacher.
“The ASL community is very different and special,” Fowler said. “We are always excited to meet anyone who knows our language. It makes our world more accessible and it reduces frustration for all deaf individuals. I have members of my family who sign with me, and they sign okay, but I have some who don’t sign very well. But, the whole point is to make it a positive interaction.”
Fowler hopes the program at WJHS will continue to expand within the community and maybe even to other schools.
“It’s a rarity to have American sign language offered in high school,” Fowler said. “Usually, you have to take it in college or some other opportunity. At least having basic sign language skills presents opportunities to others. It shows us in the deaf community that people have an open mind.”