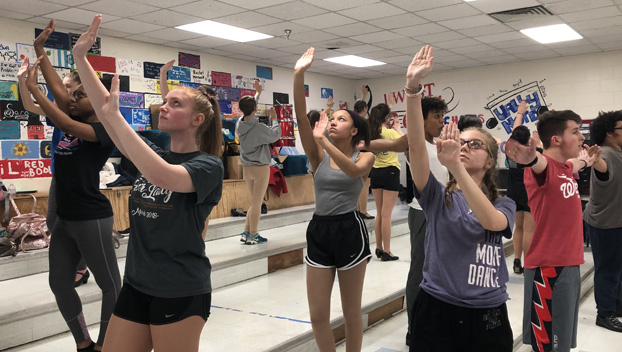 Currently standing as the only show choir in the state of Kentucky, West Jessamine High School’s Dually Noted Show Choir has grown and will compete twice next month with its show “Redemption,” complete with songs from the musical “Ragtime” and artists such as Bruno Mars.
“Being the only competing show choir in the state is a unique situation,” Brett Burton, director of choral activities, said. “We are always in the situation of David vs Goliath. All these Ohio and Indiana groups who have done this for years intimidate me.”
Burton took over in the fall of 2017 and took the choir from an extra-curricular group rehearsing on Monday evenings, to a co-curricular zero block class that meets every morning and uses Monday evenings to rehearse bigger portions of its show.
Beginning in 2010 as a student-run and student-led show choir, Dually Noted focuses on giving local performances and giving back to the local community through service projects, Burton said. In the past, the choir was only able to attend one overnight competition, but this year, two are scheduled for next month. March 2 the choir will head to South Dearborn in Aurora, Indiana before heading to Fairfield in Northern Cincinnati later in the month.
“The Fairfield Crystal Classic is a huge event bringing in choirs as far as California to compete,” Burton said.
For Choreographer Kaitlin Despain, show choir is nothing new. Despain started a community-based show choir comprised of high school and middle school students from seven different schools, and for financial reasons started designing her own choreography along with a friend.
“I took dance lessons off and on growing up including jazz, tap, and lyrical and I was in show choir for my last two years of high school,” Despain said. “I didn’t really start choreographing until I was in college. After I graduated college, my first teaching job was a high-powered show choir program in West Virginia, and that taught me a lot.”
Although there is no specific plan for how Despain says she creates her choreography, she does go through a series of considerations and says there are times when the vocal part of the song will lead itself to a particular movement.
“My favorite part about choreography is coming back to visit the group later in the school year and seeing the final version all cleaned up and in costumes,” Despain said.
For Burton, his hope is to expand the class and include band students who have a period to work on their music for show choir performances. He would also like to start a middle school show choir in Jessamine County.
“Show Choir in Kentucky is not a very big attraction,” Burton said. “There are Midwest, South, East Coast, and West Coast circuits – but somehow the genre is very small here. There have been groups in the past (from) Louisville and Oldham County to name a short list, but it is the same time, effort, and funding that goes along the lines of how marching band is done in Kentucky.”
In the show “Redemption,” the music consists of “Icarus” sung by Bastille, “Hell or High Water” sung by Billy Porter,  “Till We Reach/Make Them Hear” mashup from the musical Ragtime, “The Other Side” sung by Bruno Mars, and “The River” sung by Jordan Feliz. Burton said students have worked hard and he feels he has a great group that is ready for competition.
“The show choir has certainly grown and flourished. Students have come through the program and have loved being challenged physically and musically. It is something different that is not like singing in concert choir. It is more along the lines of musical theater. If you love to sing, to dance, and to perform combining those two areas – then show choir is a wonderful way to be challenged.”
“Working with the kids are WJHS was a great experience. They are all very kind, conscientious and hard working. It makes my job easy when a group is committed and wants to do well,” Despain said.