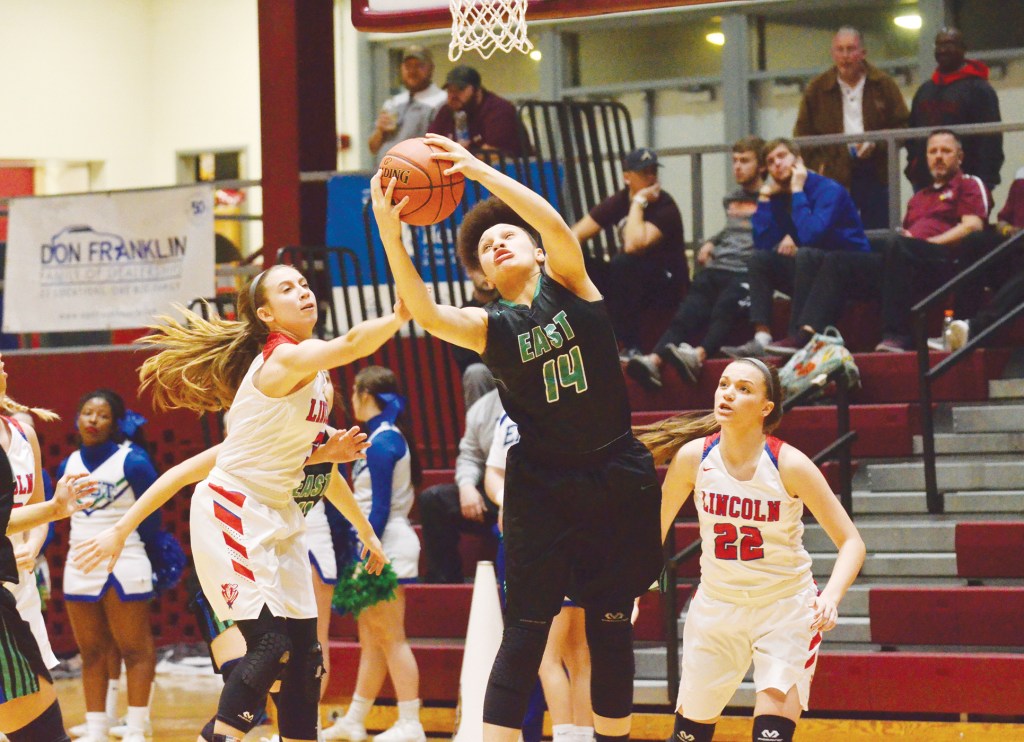 The Lincoln County girls basketball team showed off its speed and experience in a 67-38 victory over East Jessamine in the first round of the 12th Region Tournament at Pulaski County High School.

Wednesday night’s game was never in doubt as the Lady Patriots (24-6) exploded out to a 30-4 lead in the first quarter. The Lady Jaguars, who had two middle schoolers in the starting lineup and more seventh- and eighth-graders as some of their top reserves, were no match for Lincoln’s experienced starters – four seniors and a junior – and deep bench.

“They are very young,” Lincoln coach Cassandra McWhorter said of East Jessamine. “They start a lot of eighth-graders. I think they only have one senior on the team. A lot of youth. A lot of talent and athleticism is there. You can see it. It’s just the experience and honing those skills as they mature and age.”

Emma King paced Lincoln in the win with a game-high 20 points. She kicked off her scoring with four points as the Lady Patriots opened on a 13-0 run. Maddy Boyle, who hit double figures with 12 points, opened the run with a 3-pointer, Trinity Shearer added a bucket and Zaria Napier sank four free throws.

Freshman Irma Hagins scored East Jessamine’s first field goal with 5:20 left in the first to end the Lincoln run and make it 13-2.

That would be as close as the Lady Jaguars would get, as the Lady Patriots blew the game wide open with a 17-2 quarter-ending run. King and Boyle scored five points apiece in the run, Anna Lane added three points and Kaitlynn Wilks and Shearer each had two to make it 30-4.

The lopsided lead allowed McWhorter opportunity to work her bench early – and she did. Every Lady Pat saw several minutes in the varsity game. And 11 of those 15 Lady Pats got in the scorebook as the team advanced to Sunday’s semifinals.

“We came out, took care of business. You get to play everybody in the region tournament, which is special, and you move on to the next round,” McWhorter said. “It’s hard because your starters want to get in more flow and a rhythm, and they want to play the entire game. But you look at it as a confidence boost. I think it’s important that all those kids get a taste of region.”

Lincoln was up 38-4 early in the second quarter when East went on its own run. Jermyra Christian, who led the Lady Jaguars with 15 points, pushed in three points in the run and Hannah McLain added two before senior Jasmine Atkerson lit up from long range with three 3-pointers to make it 43-18. Atkerson finished with 11 points.

Twenty-five would be the final margin with both teams getting 20 points in the second half. Lincoln, which led by as many as 40 points in the third quarter, took a 60-25 lead into the fourth. The Lady Jags (10-21) would outpoint Lincoln in the final frame, 13-7.

Lincoln will face Southwestern Sunday at 2:30 p.m. in the regional semifinals. Southwestern advanced with a 68-34 win over Pulaski County.