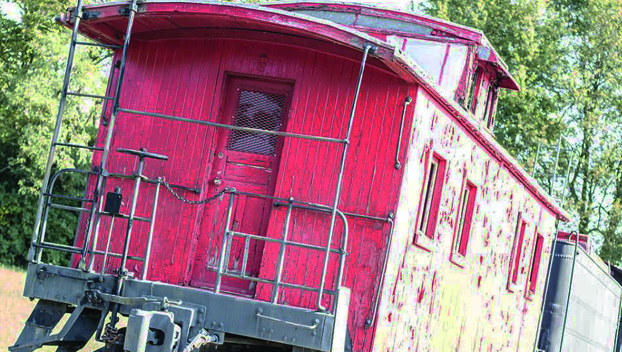 The Nicholasville City Commission and the Jessamine County Fiscal Court recently approved an agreement to revitalize the caboose at Riney B. Park which currently sits in need of attention with faded flaking paint, according to Nicholasville Mayor Peter Sutherland.
“We need to paint them an make sure the roofs are in good condition,” Sutherland said. “The engine and other car are going to be sandblasted and painted through the donation of funds by the Paris chapter of National Railroad Historical Society. These are historical in nature as they don’t build or use cabooses any longer and the engine was a steam engine and they are no longer around.”
A $4,000 grant was applied for through the National Railroad Historical Society by the Nicholasville City Commission and the Jessamine County Fiscal Court, and if approved, Jessamine County Parks and Rec will provide $4,000 in a match.
“We believe we have $4,000 in parks and rec that will make this work without any revenue,” City Commissioner Doug Blackford said in a recent city commission meeting. Blackford said the additional funds from the parks and recreation department is left over grant money from previous work done on the caboose.
“I have been out there to take a look at it and it is desperate. It is pretty bad,” City Commissioner Patty Teater said in a recent city council meeting.
“I think it is a land mark that you can identify the park with when you get to the caboose turn,” Jessamine County Judge Executive David West said. “It marks the entrance to the park. Since Riney B. was the name of the railroad line that passed through the property it is an important historical sign to that park.”

From staff reports In February, the Nicholasville/Jessamine County Drug Enforcement Unit, along with the DEA, have indicted several suspects for... read more