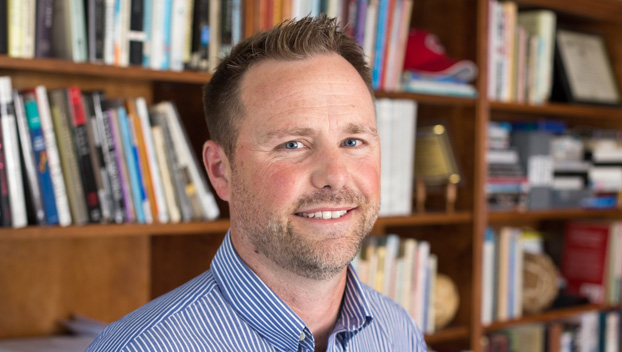 What’s a professor to do when a textbook he or she loves using in class becomes outdated over time? That’s the dilemma Dr. Paul Nesselroade, chair of Asbury University’s psychology department, found himself in during his spring 2016 statistics class.
“I used a textbook that had a lot of really good aspects to it,” Nesselroade said. “It was just never being updated. Eventually, I became embarrassed by using a textbook with such an old publication date. Mathematics, of course, don’t change so I justified it for a while.”
The book in question was “Statistical Applications for the Behavioral and Social Sciences” by Laurence G. Grimm.
Nesselroade said he contacted the publisher to see if there were any plans to release an updated version, or if there were similar books they could recommend to him. The publisher informed him that the original author was deceased and there were no plans to update it. But, Nesselroade said a conversation sparked and soon he was offered a deal to update the textbook himself.
Nesselroade’s “Statistical Applications for the Behavioral and Social Sciences, 2nd Edition” was released in December 2018 under John Wiley & Sons, with an e-publication version recently released, as wel
“I was basically trying to save a book that was going to be lost,” Nesselroade said. “I thought it had good bones, like a house that needs to be updated, but the structure of it is solid. I liked the flow and organization of it, but I thought it needed to be rebuilt and remodeled a bit.”
The University agreed to let Nesselroade take a sabbatical during the fall of 2017 and he began the hefty process of writing, editing, restructuring and adding to the 25-year-old book.
“Probably the most rewarding part was the sense of accomplishment I felt when I finished,” Nesselroade said. “I hope what’s going to be rewarding is, at the end of the semester, to look back and see that this was a helpful tool for student learning. This is the first semester I’m using it. I’m hopeful that, in time, other professors will see the value of it for their classes as well.”
One aspect of the new edition that Nesselroade is especially excited about is a series of sections called “Is science broken?” These side-bar discussions are spread throughout the textbook and explore the “replication crisis” that many social science publications are currently experiencing. The new book also accounts for the technological changes of the era and includes accumulating section reviews throughout the text, so that students can be challenged to refresh their memories on previously learned concepts.
“I’m grateful to the school for the sabbatical and I hope that it reflects well on our institution that we as faculty are contributing in this way,” Nesselroade said. “Asbury students and the academic reputation of the school are enhanced by professors doing things like this.”
Though he’s in the midst of a well-deserved “rest phase” from extracurricular projects right now, Nesselroade is dreaming up a few possible future endeavors, including a writing project based on the Human Dignity Tour, a trip he takes with students each spring to Germany and Poland. He’s also contemplating the possibility of creating a related course called “The Psychology of the Holocaust.”

From staff reports Asbury University’s Imagine 2022: Vision for Faithful Change is nearly halfway through its implementation and has already... read more