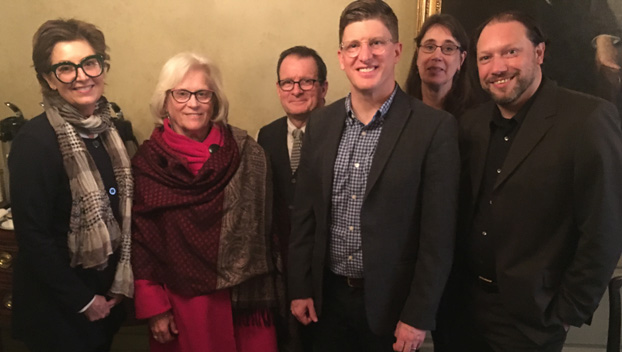 Asbury University professors strive to demonstrate the highest levels of academic excellence and spiritual vitality, not just in preparing students to impact the world, but also in engaging with the greater academic community.
Dr. Linda Stratford, professor of art history, recently returned from New York where she did just that, attending the Association of Scholars of Christianity in the History of Art’s (ASCHA) Christianity & Art History Annual Symposium and participating in a panel discussion at the College Art Association’s (CAA) Annual Conference.
Stratford served as a discussant and commentator during a panel discussion at the CAA annual meeting held at the New York Hilton Midtown. The panel discussed the topic of “Modernist Prodigals: Aesthetic Aftermaths of Religion Conversation.”
Prior to her speaking engagement, Stratford attended the ASCHA symposium, which was entitled “Waiting for the End of the World: Eschatology and Art,” where she explored art from 1939 to 2019. Symposium activities and events centered on the way that apocalyptic thinking and imagery have enlightened the work of avant-garde artists. Art historians from across the country were in attendance at the New York University-hosted event, Stratford said.
Though she lent her expertise during the CAA panel discussion, both events were also learning experiences for Stratford, who came home with a fresh perspective on the ways in which religion and academia interact.
“(My biggest takeaway from the week was that) religious concerns can be treated with the nuance and historical complexity with which academics treat other topics such as class and gender,” Stratford said.
Another exciting aspect was seeing how ASCHA, which was founded thanks to the efforts and collaboration of Stratford and Dr. James Romaine of Lander University, has grown over the last nine years. Stratford currently serves as treasurer.
“ASCHA grew out of an initial seminar in Paris held in conjunction with Asbury University’s Paris programming,” Stratford said. “In 2010, a group of scholars interested in the intersection of art history and Christianity came to the consensus that the field of art history lacked scholarly forums in which issues of the history of Christianity in the visual arts could be openly, charitably and critically addressed. The Asbury-hosted symposium is now known as the inaugural event of ASCHA.”
Stratford said she is grateful for the opportunity to represent Asbury and participate in the wider academic conversations that are happening in the art world right now.
“(Asbury) faculty are thankful for the professional development funding that allows (us) to be part of national scholarly conversations,” Stratford said.