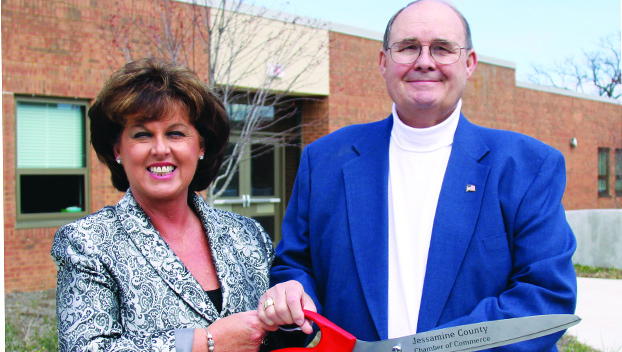 Jessamine County is mourning the loss of a prominent figure in the county who served on the Jessamine County Board of education for 32 years and the namesake of the new diesel mechanics program facility.
Eugene S. Peel died Feb. 15. He was 72.
“It was an honor and a pleasure to know Mr. Eugene Peel and to work with him on behalf of the students of Jessamine County Schools,” Supt. Matt Moore said. “Although Gene had completed his service on the board prior to my taking over as superintendent, I worked with him for a number of years during my time in previous positions in the district.”
Peel was elected to the Jessamine County Board of Education in 1984 and retired from the board in December 2016.
During his last meeting, Peel said now that he had a few extra hours on his hands, he planned to spend his time with his family and grandchildren and do a little fishing.
“It’s not about me, it’s not about the board, it’s about the kids,” Peel said during his final meeting.
At the time, Kathy Fields was JCS superintendent and said, “Your legacy will long outlive you. We certainly want to thank (you) for (your) dedication and 32 years of service to the students of Jessamine County.”
Peel served as board chair twice, once from 1985 to 2000 and again from 2011 to 2016.
During his service on the board, the district’s student population grew by more than 40 percent and the number of schools more than doubled from six to 13.
While working for JCS, Peel worked under six superintendents.
“Mr. Peel was instrumental in the construction of 10 new district facilities, the renovation of eight buildings as well as the opening of four athletic facilities,” JCS Communications Director Patrice Jones said. “During his time on the board, Mr. Peel approved and oversaw the opening of the Jessamine Early Learning Village, The Providence School, and Jessamine Career and Technology Center (as well as) three statewide model sites for specialized educational services.”
In September 2018, JCS named the new diesel mechanics facility after Peel in honor of his commitment and dedication to the students in Jessamine County. The new building is more than double the size of the previous building and includes the addition of another bus bay, in-ground lift, a wash bay, restrooms, an upgraded fuel system, new office space and additional bus and vehicle parking. Several pieces of equipment are scheduled to rotate through the center offering students a wide range of diesel trucks to work on and learn from.
“I’d like to thank my Lord and Savior Jesus Christ because he is the one that gives me everything,” Peel said during his speech in September at the dedication. “I thank my family and my little wife … well everybody in this community. I want to thank everybody. Without your support of this school district we could not have accomplished anything — and don’t ever forget that. You are the reason why we did it for our kids.”
Peel’s accomplishments during his time serving with the board of education in Jessamine County include the implementation of full-day kindergarten, the addition of School Resource Officers and the transition to tobacco-free campuses.
Peel’s work with the JCS system will continue to benefit JCS students for many years to come after his passing.
“I recall when the board was discussing issues or making decisions that were sometimes difficult, Gene kept his focus on what was best for students, often saying, ‘It’s for the kids,’” Moore said. “His face would light up with pride at school performances or when the board recognized students for their achievements. It was apparent that Gene loved his work on the board and he was a staunch advocate for students and a special leader in our community. His impact and shared accomplishments, from facilities to programs, to policies will benefit JCS students for many years to come.”