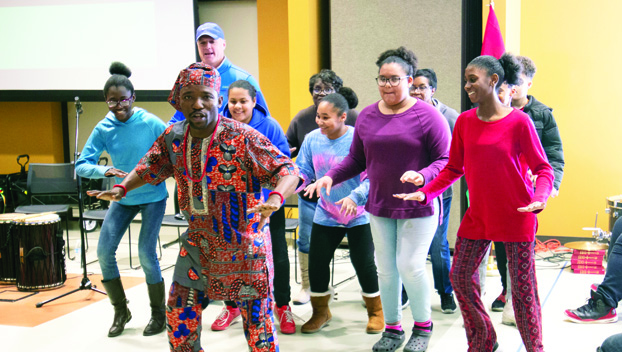 Last Saturday, just down the hall from the usual stillness of the rooms filled with books at the local library, a large room reverberated with the sound of African drums, singing, dancing and large congregations of people who were celebrating what Black History Month represents to them.
The annual event was sponsored and funded by the Jessamine County Fiscal Court’s office.
“The fiscal court is pleased to participate in this event again this year,” Judge-Executive David West said. “We celebrate the African-American citizens of Nicholasville and their culture and we’re proud to join them today to share in the Black History Month festivities.”
Leonard Fitch’s IGA in Wilmore catered the luncheon with southern fried chicken and all the trimmings.
Anna Kenion organized the event with the help of Ron Critchfield, the director of the Jessamine County Public Library and his staff. Kenion was presented the key to the city by Commissioner Doug Blackford for her outstanding efforts.
In her opening remarks, Kenion acknowledged Matt Moore, Jessamine County Schools superintendent, and Andrea Nielson from the Jessamine Early Learning Village.
“Last year, only 40 percent of black children of preschool age in Jessamine County met the criteria to begin kindergarten,” Nielson said. “This year, that number has fallen to 27 percent. The Care Council wants to make sure that all children have the same advantages to help them prepare for school. I call on all the African-American churches to follow through and ensure no child, regardless of race, misses out on the advantages that are the right of every child in this county, or any other.”
Nielson prepared a table with information on the Jessamine County Community Early Childhood Council and the Jessamine Early Learning Village for any attendee who has or who might know a child of preschool age who could benefit from assistance in preparing them for kindergarten.
Three members of the Bi-Okoto Cultural Center from Cincinnati, kicked off the entertainment portion of the celebration. Bi-Okoto was established in 1994 as a professional African dance company. The organization is regarded for its innovative repertory and programming both nationally and internationally. The performers at Saturday’s celebration were Kehinde Adeyemo-Fasuxi, Funmilayo Aiamufua and Mathew Shatim.
The First Baptist Church on York Street in Nicholasville was this year’s highlighted African-American church. Pastor Moses Radford led the spiritual portion of the event. His daughter, Casondra Radford, has traveled to Africa five times in the past five years and took time to perform with Bi-Okoto Saturday afternoon during the celebration.
“I learned the story behind the dances,” Radford said. “I’ve always been intrigued by dances from the people (and) groups of various countries in Africa, so I was engaged as we were educated about Nigeria (in) West Africa, whose official language is English due to British colonization.”
During a brief question and answer period, Bi-Okoto members allowed the audience to ask them about their homeland in Nigeria. Those in attendance learned Bi-Okoto had been drumming professionally for more than 30 years and dancers perform barefoot to be as close as possible to Mother Earth and have less restricted movements.
“Black History month is the time of year I reflect on what my ancestors sacrificed so that I could be successful today,” Radford said. “Yes, Africans were brought to the U.S. against their will, forced to learn a new language, work without pay, be abused, raped and made to entertain on cue — but that’s only part of American history. Black History Month reminds us to focus on the inventors, scientists, artists, engineers, doctors, judges and educators who climbed the wall that was built for years to keep them from an opportunity of equality and freedom.”
Radford said black history books give a warped view of the contributions to society by black Americans.
As the only African-American in her class growing up, Radford said the black history she was taught focused on oppression.
“It was tiring, and all eyes would be on me,” Radford said. “My mom taught us our history at home. I learned I come from royalty. Children need a mirror. Education should reflect the diverse population in the school. Students need to see positive role models in history books more than Martin Luther King Jr., Rosa Parks and Harriet Tubman. They aren’t the only ones.”