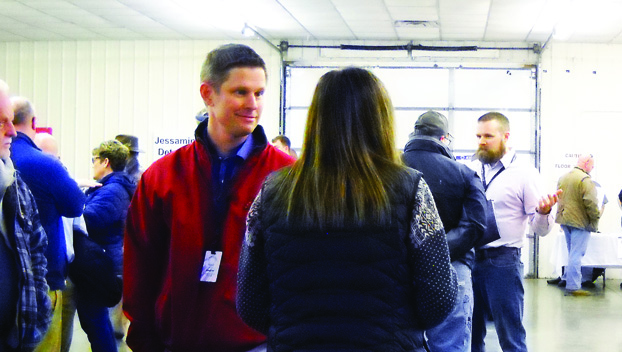 By Anne Carmichael
For the Jessamine Journal
Judge-Executive David West welcomed more than 100 Jessamine County residents to the inaugural fiscal court open house last Friday to answer questions and discuss department needs with local citizens.
“The magistrates and I wanted to do something a little different for the community than most other counties have done,” West said. “We wanted to highlight each of our departments and allow the knowledgeable representatives to speak to the shortfalls and specific needs of their department, answer questions and provide an accounting of how we’re doing in real time.”
West said most counties in Kentucky have public forums which allow its residents to listen to statistics and financial reports which can sometimes be hard to understand.
“They usually have a question and answer session where specific topics may not address the concerns of every resident due to time constraints and debates which ultimately are non-productive. We felt like if we just set up booths and let each department display their information and speak one-on-one with the citizens they’re serving, we could impart more information, answer more questions and deal with specific concerns head-on,” West said.
At each department’s booth, the overwhelming theme was that Jessamine County employees are underpaid, departments are under-funded, understaffed and working with sub-standard equipment in facilities that are in dire need of expansion and/or repair. Overwhelmingly, the hot topic on the minds of many attendees was the need for a new jail.
Chief Deputy Dru Parsons of the Jessamine County Detention Center shared a video depicting the poor conditions of the current facility, as well as its age and inadequate capacity.
“The detention center was meant to hold 136 inmates at its maximum capacity,” Parsons said. “We currently house an average of 190 inmates, and therefore must ship out approximately fifteen prisoners per day to be housed in other counties at a cost of $31.34 each.”
One of the attendees at Friday’s event was Barbara Burton, who has been visiting the detention center on Saturdays to host a Bible study for inmates. Her group has baptized hundreds of inmates since September of 2015. A recovery group called Genesis also visits the jail to address what they believe to be a rampant increase in drug addiction and the opiate crisis in Jessamine County.
“We were turned away this past Saturday because the jail was overflowing and there was no place for us to meet,” Burton said.
Also echoing the need for the new jail was Debbie Hager, widow of the deceased magistrate from District 5, Burch Hager.
“Burch served Jessamine County for nearly six years, having lived in the Chrisman Mill area all his life,” Hager said. “He took his job very seriously. If there was a need that he felt passionately about, even if the funds weren’t there, he would fight to get it done. He believed strongly in the need for the new jail.”
Aging equipment in the county was also one of the major concerns for many departments, such as the Sheriff’s Department whose cruiser fleet has a total of over three million miles on the vehicles. Sheriff Anthony Purcell shared one startling example of what can happen when a vehicle is no longer dependable.
“We had a deputy responding to a call way out in the county when his cruiser just died in the middle of the road,” Purcell said. “With no time to wait for back-up, he went on foot into a situation that left him vulnerable. These are men who put their lives on the line every single day. They need reliable transportation.”
Jessamine County resident, Joann Travis, commended the employees of Jessamine County for the work they do. “This community has some of the most dedicated employees. They always go the extra mile, often for sub-standard pay. They could very easily go to other counties and make more, but they elect to stay here because they’re loyal to the community, their jobs and the residents.”
County Attorney, Brian Goettl agreed. “My office is understaffed and underfunded, but we have the most exceptional staff. We are the Child Support Office of the Year, in spite of these constraints and because of the loyalty and hard work of our team.”
David West agreed. “We start 9-1-1 response team members out at $10 an hour. They deserve so much more.”