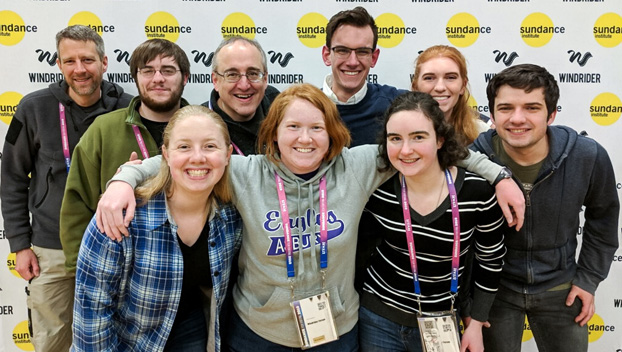 These students, members of a media communication travel course specifically centered around attending the festival, were given the ability to participate, network and be immersed in the culture and energy of the film industry.
Sundance is the largest independent film festival in the United States, with many showings attended by well-known directors, actors and writers. Many of the directors hosted post-showing conversations about their films and the deeper meaning or motives behind them. Festival films shown throughout the week ranged from comedies to documentaries and dramas on more serious subjects.
The trip is coordinated through the Windrider Institute, which brings Christian film students from across the nation together at Sundance where they take part in sessions and discussions with directors, producers and other crew members. Students also attend the viewings of several films entered into the festival. Asbury has been working with Windrider, which recently began a formal partnership with the Sundance Institute, for fifteen years.
Kari Brown was one of the seven students who sojourned to Park City.
“It’s great, any student can sign up. You get to go to Utah and watch a bunch of films and that’s the class,” Brown said laughing. “It’s nice to go somewhere like Sundance where there are a lot of people there who also respect film (and you) get the opportunity to network and reach out with real professionals and have the ability to feel like you’re (part of) the industry.”
Brown was able to attend the showings of eight different films, including “Clemency,” the story of a prison warden whose job is to carry out executions, and “Little Monsters,” a film about a teacher trying to protect her kindergarten students from the zombie apocalypse. Along with getting to see these films, Brown was able to connect with a financial producer while there, giving her the chance to see what life is like working in the industry day-to-day.
“It’s very different to see things up close,” Brown said. “I think there was only one film I saw where the director was a white American, just a testament to how diverse it was. Also, we were able to see an Oscar-nominated short film before many other people were. How often do you get to say that?”
Asbury University continues to sponsor trips and courses, just like the Sundance class, to enrich students’ education with hands-on opportunities.